Central African Republic: “We’re at the mercy of God, please pray for us.” 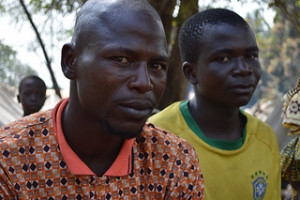 Ulrich, 19 year old, started working in a gold mine a few months back. But a recent attack by the Seleka had him fleeing for his life. Credit: Valerie Kaye/Caritas

Caritas staff in the Central African Republic are reporting the capital Bangui and many parts of the country are gripped by chaos and terror as fighting continues between forces loyal to the ex-president and the fighters who overthrew him.

“The whole country is terrorised,” said Fr. Anicet Assingambi of St Charles de Lwanga parish in the north of Bangui. Tens of thousands of people are seeking shelter in Bangui’s church buildings and church compounds throughout the country.

“There are five thousand people hiding in our parish buildings. A woman told me she’d seen her brother gunned down. All men are shot at if they go outside. There is a young man dead on the street outside, but it’s too dangerous to go outside to remove his body,” said Fr. Anicet Assingambi.

It’s impossible at the moment for Caritas staff to reach those in need with food and other aid.

“We have nothing to give them ,” said Fr. Anicet Assingambi. “Their homes have been looted. They’re mourning their dead. When they arrived in the church, the children were crying. We sang hymns and said prayers and that has helped calm people down. We have never seen anything as bad as this before. We’re at the mercy of God, please pray for us.”

In Bossangoa in the north of the country, Caritas fears for the safety of over 40,000 people camped out in the Catholic Mission compound and 1600 people who are hiding in a school. Clashes have occurred in the town. A rocket landed in the mission Friday, miraculously not killing anyone.

A small regional African peacekeeping force of 200 soldiers is the only protection the people have. France has sent troops under a UN mandate to restore order, but time is running out.

“All the houses have been burned down,” said the Vicar General of Bossangoa, Fr. Alain Eouanzoui. “If French troops don’t arrive by tomorrow, it may be too late.”

In the north east, Caritas staff say that houses have been torched and people killed in three villages near Bozoum.

“Around 300 people stayed the night in the church,” said Fr Aurélio Gazzera, the local diocesan Caritas director in Bouar. “Everyone is afraid. Going outside, you see many men have armed themselves with machetes and knives to defend themselves.”

Caritas Central African Republic Director Fr. Elysee Guendjande is out of the country in Rome at the Caritas Internationalis office. He is still recovering after being shot in the leg earlier in the year.

“We need Caritas organisations around the world to join together in helping the people of the Central African Republic in this unprecedented crisis,” he said.

The Catholic Church in Central African Republic is calling for an immediate cease-fire and for humanitarian aid to be allowed through.

For more information, please contact Valerie Kaye, Communication Officer for Caritas Internationalis at +39 06 698 79757 or by e-mail at kaye@caritas.va