Hope still standing in the Philippines 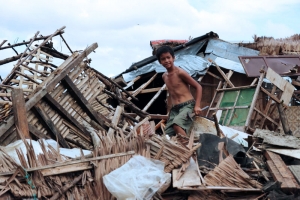 The devastation wreaked by the wind, and the storm surge that followed, is difficult to put into words. Barely a house has survived intact in Palo. Credit: Caritas

By Mark Mitchell, Caritas Emergency Team Leader in the Philippines

A cross stands high over the city of Palo, a little askew and battered by the wind but holding on strong – a symbol of hope.

Much has been written about Super Typhoon Haiyan and the destruction it left in its wake. The destruction is as bad as I’ve seen, and I’ve been to many disasters round the world.

The devastation wreaked by the wind, and the storm surge that followed, is difficult to put into words. Barely a house has survived intact in Palo.

On municipal buildings galvanised iron roofs have been peeled off by the wind almost like one would peel a banana. Concrete walls have been pushed down by the force of wind and water.

For those living in more humble shacks everything has gone, everything!

At the edge of the city there are areas of fetid water with a thick black layers of mosquitoes. The stench of death and decay hangs carried along by the swarms of flies.

And yet hope remains. Children continue to play and smile as I take their photo. The elderly queue patiently waiting their turn in the distribution lines.

Market stalls have already begun to spring up again selling fruit and veg. Who knows where they get the produce from as all the trees and fields have also been destroyed and next week some schools will start to open.

Today, in Tacloban, I met Abilene Abihar. She and her family live in a small community of about 100 people. She told me that 30 people had died in the storm.

They have received a small amount of food through the church and will receive more from Caritas soon. Yet they are a living example of resilience. They have started to rebuild temporary shelter with reclaimed timber and straightened out some galvanised iron sheeting for the roof. To complete the picture a Christmas tree stands on a small porch as if in defiance of the chaos of the world around it.

It is a slow process getting the aid out to those that so urgently need it.

Challenges abound: blocked and damaged roads; the airport in Tacloban has been reduced to a shell but crammed full of local flights airlines and the heavy-lift C130 defence aircraft from around the world.

Every fuel station I pass is destroyed leading to a shortage of fuel. And yes, in some cases, coordination could be better. Yet as I flew in I could see the ubiquitous, yet so necessary, tarps of the aid world returning a temporary shelter to many.

CRS were distributing hygiene kits when I arrived and a new shipment of water supply materials had just been brought in from the port. These will be set up in the next couple of days and provide drinking water to another community.

It’s difficult to imagine the magnitude of the disaster in the Philippines. The numbers of people affected become almost meaningless. Everyone has been affected to some degree.

But when you look at individual faces, and you look through the tiredness, something remains – hope.