Philippines one month after: A personal reflection 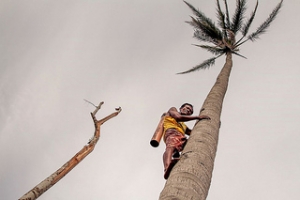 Coconut Farmer His name is Pio Ibanez, 53. Livelihoods for coconut farmers have taken a major hit. The typhoon ripped coconut trees from their roots and severed gigantic trees in half; new coconut trees will take another 5 to 7 years to grow. We will be working with coconut farmers to identify other cash crops and options for earning a stable income. Credit: CRS

Having worked for US Caritas member CRS in disaster-affected countries in Africa the past five years, I never thought that I would come back home to the Philippines to assist with the Caritas-wide response to Typhoon Haiyan.

The northern towns in my island of Negros were badly hit by the typhoon. As I closely followed the news, I felt I had to assist in some way. So a week later I was in the Philippines as part of the Caritas Internationalis emergency response.

I’ve been to Mogadishu and drove through remains of villages in Darfur. Still, I was not prepared to see the devastation caused by the wind and water in Leyte and Panay. Collapsed houses, roofs caved in and the smell of decomposing bodies.

It was heartbreaking to hear stories of lives lost, of fathers unable to hold on to their children as the water surged, of children searching for their parents or even of tearful reunions as mothers return home to find their children alive.

In Palo, the diocesan driver told us how he huddled together with his family at the height of the storm as their roof was blown away and watched in fear as three big waves came in succession towards their village, engulfing homes, schools and other buildings.

He speaks in between coughs, apologising that he’s slept under the rain days after the typhoon, remembering neighbours now dead or still missing and grateful at the same time that his family survived.

While the international response has been overwhelming and we hold so many good people from around the world in deep regard, many outside the Philippines have also not been aware of the response provided by Filipinos.

The local government and village residents have taken it upon themselves to clean up the debris from the typhoon. Children have gone back to school, some in makeshift classrooms. Small business have started to reopen.

Electric cooperatives from all over the Philippines have sent teams to the affected areas to help restore electricity by Christmas. Catholic high schools and universities have set up relief operation centres within days after the typhoon, other dioceses have adopted affected dioceses and mobilized resources to provide financial and moral support.

Diocesan staff from Luzon and Mindanao trained in emergency preparedness and response have been deployed by Caritas Philippines-NASSA to affected dioceses to provide much needed support as staff still reel from the disaster.

In Palo, one volunteer from a diocese that was affected by a typhoon two years ago has managed to repair desktop computers, printers and photocopier.

The Diocese of Tagum mobilized trucks from their city’s local government unit for the Archdiocese of Palo and sent a team of chainsaw operators who had worked in a previous shelter project to help with debris cleaning and emergency shelter construction efforts.

Catholic universities have provided food aid to islands that have not received any assistance. Religious congregations deployed staff trained in psycho-social trauma to provide much needed pastoral support to the affected dioceses.

It was also heart warming to see the coordinated response of the Caritas confederation and to reconnect with colleagues I had worked with in Africa who are now helping with relief efforts. Many times I’m moved to tears by these acts of solidarity, especially as it is so close to home.

Many people have written about the indomitable spirit of Filipinos, our ability to smile in the midst of the devastation, our strong faith that we shall rise up again after this tragedy.

Haiyan is known as typhoon Yolanda in the Philippines. In December last year, I lost an aunt who was like a second mother to me, also named Yolanda. She was a strong woman who cared for family and helped people in need quietly. As I remember her, I know that despite loss we can stand up again.

Filipinos have started to post slogans in social media or print shirts with the words “Bangon Visayas! (Rise up Visayas!) or “Tindog Leyte!” (Stand up Leyte!). Together we can work with communities to rebuild their lives, even if it will take years.

I’m grateful to be back home and to be able to assist in some way. As I continue to travel through the devastated landscape, I find consolation in the deep belief, as written by Julian of Norwich, that “…all shall be well, and all manner of things shall be well.”