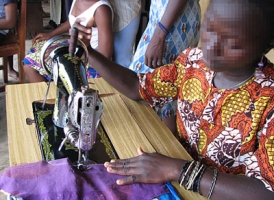 I’m in Madrid wearing a pair of skinny jeans that cost 16 euro. ‘Great buy!’ I thought when I got them last week. Now I’m at a trafficking meeting where people are discussing forced labour, I’m not so sure. Just who was it that made these jeans?

Coatnet is an anti-trafficking network of 37 Christian organisations. Many also belong to the Caritas confederation. Caritas Internationalis acts as the secretariat for Coatnet.

The International Labour Organization says almost 21 million people are the victims of trafficking. The vast majority are from Asia and are women.

Ombudswoman for Spain, Soledad Becerril Bustamente said at the opening of the meeting, “Labour exploitation has replaced the slavery of other eras.”

However, it’s not just a simple case of people being taken and being made to work against their will.

Chatting to participants from various parts of the world, I discovered that people walk into trafficking situations really believing that it will make their own and their families’ lives better.

Fr George Sigamoney, director of Caritas Sri Lanka says traffickers are very shrewd. “They identify local agents to speak with village women,” he said. “They give lump sums to the parents or husbands. They promise more money and a better future. They make them believe that they’re tourists. They take them to Thailand or Singapore and from there they’re taken to Saudi Arabia, Jordan and Lebanon.”

Felix Kangama, from Caritas Mali, says traffickers come to villages and take girls, making them promises. They often end up trapped in places like Lebanon and Saudi Arabia. There they have their passport taken off of them.

Fr. Hagos Hayish from Caritas Ethiopia says they have a project to ensure births are registered immediately. This prevents parents from changing the ages of their children and sending them abroad to work at a young age.

The sad truth is as long as there’s demand, there’ll be supply. Whether that be for domestic workers, factory workers, sex workers or construction workers. In trafficking, people become merchandise in an international market.

Giuseppe Gulia, from the Italian Christian workers’ association ACLI, says, “Victims of trafficking are already victims before being trafficked. They’re merchandise. It’s key that they get more access to help and services. One service is justice.”

Pope Francis said last December, “Trafficking in human persons is a crime against humanity. We must join forces to free the victims and to stop this ever more aggressive crime, which threatens not only individual persons, but also the foundational values of society, as well as international security and justice, along with the economy, family structure and social life.”

Pope Francis also mentioned the “throw away” culture which surrounds things such as trafficking.

I had my 16 euro jeans on my mind as I had breakfast with my trafficking colleagues this morning. I found myself sitting opposite Elena Timofticiuc from AIDRom – The Ecumenical Association of Churches in Romania.

She told me about one of the cases she’d worked on in Romania. They’re received a report of 100 Chinese women who were working many hours in terrible conditions in a clothing factory. They’d signed contracts with an agency in China with the promise of well-paid work in Europe. Even though AIDRom was trying to help them, they were too afraid to talk in case they were sent back to China. Elena said that working so hard for very little money had more or less become their ‘normality’.

Caritas Sweden’s George Joseph said, “People may think it’s best to avoid buying items made in places such as Bangladesh or China, where there are reports of worker exploitation and buy clothes made in Europe, but what they don’t understand is that it’s the same workers.”

Elena added, “There’s the demand for labour on the one side, the supply of labour force on the other and the agencies in the middle. It’s a chain.”

Trafficking and forced labour are by nature clandestine and easy to ignore. But it’s about a global market, where people are bought and sold rather than goods. It’s easy to forget that globalistation means that we’re all involved in this.

My jeans were made in Pakistan. A recent report said Pakistan ranks third in the Global Slavery Index. I can’t say whether my jeans were made by forced labour. But considering how little they cost, someone’s paying a high price somewhere.