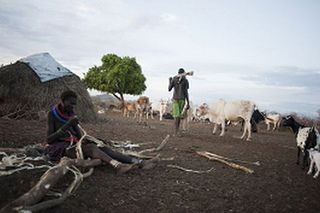 Churches in South Sudan are urging leaders and people not to turn their back on peace. Credit: Elodie Perriot/SC

Growing numbers fleeing conflict in South Sudan. Fighting has forced 400,000 people from their homes to places inside the country. Violence broke out in mid-December. And now nearly 80,000 people more have fled to neighboring countries.

The death toll is now estimated at over 10,000 people. The humanitarian situation in many areas is extremely grave. Caritas has been providing aid since the crisis broke out.

“Most are women, children and the elderly. Many are still in war zones. Many are living in the wild, under trees. Some areas are still not accessible to aid agencies because of the violence. Our biggest concern is being able to reach them”

Despite regional peace efforts, the bloodshed continues. Jonglei and Unity State are particularly badly hit. Recent days has seen a spike in the numbers abandoning their homes.

“Despite the difficult conditions, many people are reluctant to return home because they don’t know what will happen with the negotiations,” said Gabriel Yai.

Caritas responded immediately in the capital Juba and across the country. Many people fled to Church compounds and other places of worship. Caritas organisations provided food and water distributions. 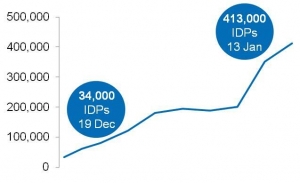 In the coming weeks, Caritas organisations will focus on shelter, providing clean water and good sanitation to prevent the spread of disease and food, though that is currently not a key concern for the immediate future.

In Awerial County, CRS and diocesan Caritas will respond to water and sanitation and non-food needs in the area. A first truck was then sent with mosquito nets, buckets, water bladders and agricultural tools.

The Catholic Church has been part of ecumenical peacebuilding efforts, including a week of prayer organised by the archdiocese of Juba.

“We are not defeated by war, death and any misbehavior,” said Arcbishop Paolino Lukudu Loro of Juba at a prayer for peace event. “Let us continue asking ourselves, where is your brother and where is your sister in the city of Juba and the country at large? Through these pains, we are not heading for death but for better life.”