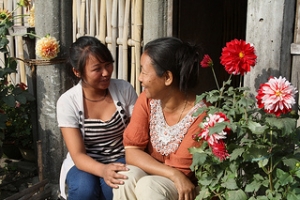 Meena (orange shirt) received training from Caritas Nepal that helped her identify when people might be bought and sold by human traffickers. Credit: Orlinsky/Caritas

The anti-trafficking network COATNET* will meet in Madrid next week to discuss trafficking for labour exploitation and domestic servitude. Moreover, members of the network will outline their common plan and collective actions for the coming years.

COATNET comprises 37 Christian organisations – many of which are Caritas member organisations – and works on advocacy, awareness raising and international cooperation to help people who are trafficked and promote legal instruments to counteract and prevent trafficking.

Najla Chahda, director of the Caritas Lebanon Migrant Centre, says, “Forced labour and trafficking are very closely linked and have at their roots social injustice. People working dirty, dangerous and demanding jobs belong to the most vulnerable segments of the population and are often migrants. It is essential to address labour exploitation as a whole while fighting against trafficking.”

The International Labour Organization (ILO) says almost 21 million people globally are victims of forced labour. The sectors where they’re most at risk are domestic work, agriculture, construction, manufacturing and entertainment.
Speaking to ambassadors at the Vatican in 2013, Pope Francis said, “Human trafficking is a crime against humanity. We must join forces to free the victims and stop this increasingly aggressive crime which threatens, in addition to individuals, the founding values of society as well as international security and justice, and the economy, family structure and social life itself.”

Caritas Internationalis facilitates and supports the work of COATNET. The Madrid meeting will discuss issues such as the legal accompaniment of trafficking cases for domestic servitude, instruments to combat labour exploitation and advocating for the ratification of the domestic workers’ convention from a migrant’s perspective.

The network has members in Europe, Asia, Middle East, North America and Africa and runs the website (www.coatnet.org) with the list of hotlines and contact information of its members.