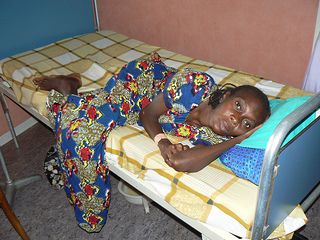 An injured woman in the Central African Republic. The country has collapsed into chaos and violence. Credit: Pétula Malo/Caritas

Close to a million people have fled their homes in the Central African Republic. Conflict and chaos continues to grip the country. That’s one fifth of the population of 4 million.

Some of those who have fled are seeking sanctuary in churches, mosques and in makeshift relief camps. Others are hiding out in the bush.

Caritas and the Catholic Church is providing aid to them.

There has been a recent change in the government. It has been welcomed by many as a step in ending the cycle violence. Regional and international peacekeeping troops have also been deployed.

It hasn’t translated to people feeling safe enough to return to their communities. People in the Central African Republic are living in fear.

“The flames have been dealt with, but the fire is still burning. The situation remains very fragile and could changeat any moment.” said Archbishop Dieudonné Nzapalainga of Bangui and president of the national Caritas. “People are not going home. They are waiting to see if the situation improves.”

The country has been convulsed by lawlessness since ‘Seleka’ rebels seized control in March 2013. Rival militias calling themselves ‘Anti-Balakas’ launched a counterattack in December. Hundreds of thousands have fled. Tensions are increasing between the majority Christian and minority Muslim populations.

Bossongoa is in the north. It is one of the places worst hit by the fighting. Over 36,000 Christians are taking refuge in the grounds of a Catholic mission. Over 4000 Muslims are living in a school. Caritas members CRS and Secours Catholique are supporting the local Caritas in providing aid.

“Each day we are counting those who have died among the displaced,” said Bishop Nestor Aziagbia of Bossangoa. “All our efforts to persuade people to go home have been fruitless. We are just not getting the results that we hoped for. For every step forward, we go three or four backwards. The real problem is the Seleka. They need to be withdrawn, but it hasn’t happened.”

From failed state to implosion

Schools and hospitals are closed. Thousands of houses are burned down. Farms have been abandoned. Years of development have been wiped away. Killings, kidnappings, torture and rape are common.

“The country lays on the ground like the rotten fruit littering the floors of our villages. The people are in disarray, wandering in the bush like wild animals,” said the Catholic bishops in January.

In the capital Bangui, 100,000 people are seeking refuge. Caritas has been able to deliver daily rations of food to women and children there despite the insecurity and difficulties.

“We had to answer the cry of the people for food,” said Archbishop Dieudonné. He often personally oversees distributions to make sure aid get through. Over 50,000 daily rations have been given out so far. 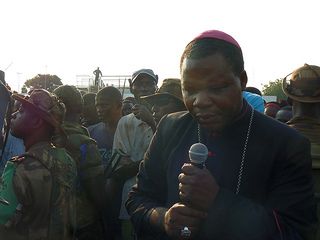 Archbishop Dieudonné Nzapalainga of Bangui and president of the national Caritas not only delivers aid, but also a message of peace to communties ripped apart by violence. Credit: Pétula Malo/Caritas

Caritas and the Church has also been working on digging pit latrines and providing hygiene kits with fears of disease spreading. Caritas is helping Christians and Muslims alike, with local businesses providing support too.

The security situation outside the capital is even worse, meaning it’s even more difficult to provide aid. In Bozoum in the north for example, over 3000 people have been living in a church compound since the beginning of December.

“People are trying to adapt despite the tension and fear when the shooting gets close,” said Fr. Aurélio Gazzera, local diocesan Caritas director. “It’s a hard situation to handle as one has to manage food, water and security.

“But it also can be beautiful. We have had 14 babies born here.”

Caritas and the Church are also working with Muslim religious leaders to promote a message of peace. “We visit the militias, travelling far and wide on impossible roads,” said Fr. Gazzera. “We try our hardest to bring rationality and humanity in the horrid folly of war.”

Archbishop Dieudonné and Imam Omar Kobine Layama, the national Muslim leader, travel together to spread a message of communal harmony. They use megaphones to address crowds. They give interviews on the radio. Women have been mobilised as the voices of peace.

“It’s painted as a religious confrontation, but it is primarily military and political,” said the Archbishop. He explains that Christians and Muslims have a strong history of coexistence in the Central African Republic.

“The crisis has destroyed our social cohesion,” he said. He lists development, forgiveness and justice based on law as key elements. “We must recreate the conditions of living and rebuilding together our beloved nation with the support of the international community.”