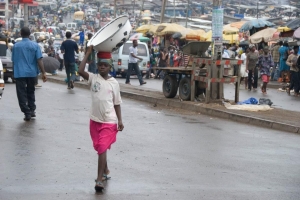 Called ‘kayayie’, porters in the markets of the Ghanian capital are child labourers. Credit: Caritas Ghana.

Child labour is often hidden from our sight. Children work long, poorly paid and sometimes hazardous jobs in sweatshops, mines and on plantations. But sometimes it takes place in plain view.

Walking on the streets and in the colourful markets of Ghana’s capital Accra it’s easy to overlook the children weaving through the crowds, carrying on their heads a variety of food or household goods. Called ‘kayayie’, these porters are child labourers.

Kayayie are mostly girls from 8 to 15 years old. The girls have travelled from lives of poverty in the north of the country in search of work in the cities and towns in the south.

As a result of their work, the kayayie suffer poor health, they live in desperate poverty, receive no education and have little protection for their own personal safety. Many end up in sex work.

Pawns on the chessboard of humanity

Globally, there are about 214 million people migrating across international borders and about 740 million migrating within their own countries. Young people account for about a third. Millions of children under 18 years old migrate internally or across borders.

Migration can mean a better life, more opportunities or an escape from violence, poverty and abuse for many children. But child migrants can face exploitation and are vulnerable to child labour.

“Migrants and refugees are not pawns on the chessboard of humanity,” said Pope Francis in his message for the World Day of Migrants 2014.

“They are children, women and men who leave or who are forced to leave their homes for various reason, who share a legitimate desire for knowing and having, but above all for being more,” he said.

Child migrants often experience maltreatment – including suffering from isolation, violence, sub standard working conditions, non-payment of wages and the threat of being reported to the authorities. 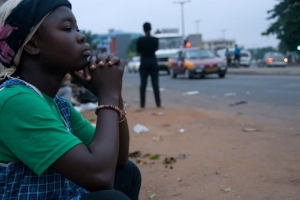 As a result of their work, the kayayie suffer poor health, they live in desperate poverty, receive no education and have little protection for their own personal safety. Credit: Caritas Ghana

The history of migration from the north reaches back to when Ghana was the Gold Coast. Cocoa plantations and mines have always pulled people south. But that migration is now feeding growing child labour, especially in cities and towns.

According to UNICEF’s 2012 State of the World’s Children Report, 34 percent of Ghanaian children aged 5–14 years are engaged in child labour. That figure is up from 23 percent in 2003,  according to the Ghana Statistical Survey.

“The kayayie are the most visible form of child migration for labour in the country,” said Zan Akologo of Caritas Ghana. “They have become a serious concern for the government and civil society.”

Improving the safety of these children on their journey and when they arrive is crucial, according to Zan Akologo, but the best protection is preventing children from migrating in the first place.

“We are trying to ensure that young migrants do not migrate when they are too young,” he said. “That means addressing the push factors: poverty and poor parenting.”

He says special anti-poverty programmes aimed at improving conditions in the north should be made to work. Skill development programmes for girls who drop out of school early should also be promoted.

“Family life education like the ones undertaken by the Christian Mothers’ Associations (CMA) in parishes should be replicated in mosques to stem the tide of irresponsible parenting,” he said.

The Catholic Church’s CMA operates in 18 out of the 19 dioceses in Ghana and has a current active membership of about 35,000 women. It’s core activities include the provision of civic, health, education and teaching of social values.

Children being forced into hazardous or exploitative work is against the law in Ghana (as it is around the world.) Yet the young girls continue to migrate to work as kayayie. They are seen, but their plight is not heard.

“As the Church accompanies migrants and refugees on their journey, she seeks to understand the causes of migration, but she also works to overcome its negative effects, and to maximize its positive influence on the communities of origin, transit and destination,” said Pope Francis.

Despite the numbers of children involved, the needs and interests of migrant children are largely absent from mainstream debates on child protection, child labour and migration.

That’s why in 2014, Caritas Internationalis is focusing on the suffering, exploitation and ill-treatment of migrant children.