Appeal for South Sudan to provide 100,000 people with aid 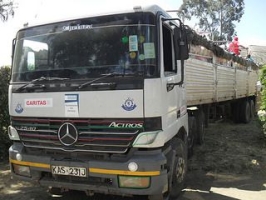 Caritas aid getting through to Torit in South Sudan. Credit: Caritas Switzerland.

Around 650,000 people are still fleeing violence there despite a cease-fire agreement. Aid agencies have reached only half of those people. The rest are in areas too dangerous to work in.

Over 120,000 have fled to neighbouring countries.

South Sudan descended into chaos in mid-December as fighting broke out between troops loyal to the government and rebels who support the former vice president. Thousands have been killed.

People in South Sudan have suffered generations of violent conflict. It’s one of the world’s poorest countries.

People already living in extreme poverty fled with nothing. Many are in the bush with no shelter or access to food and water. The needs are dire.

“Caritas South Sudan’s Executive Director Gabriel Yai said, “The situation in many areas is extremely grave. There is an urgent need to provide them with assistance. ”

Caritas organisations in South Sudan have been providing food, water and other aid to people since the start of the conflict. “Those displaced by the fighting have fled their homes with very little. They have gone to areas unable to meet their basic needs,” said Gabriel Yai.

Caritas Internationalis is launching a €2.9 million emergency appeal for South Sudan to provide 100,000 people with aid over the next 4 months.

Caritas will provide aid to people seeking safety in UN and Church compounds, as well as working with local communities helping those who have fled the fighting. 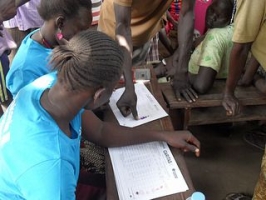 People’s shops have been looted or their homes burned to the ground. The livestock they rely on for survival have been taken from them. Destruction in places like Unity State has been massive. People will face serious challenges if and when they return home.

Caritas will also continue to support peacebuilding efforts. Christian religious leaders have sent a delegation to talks underway in Genvea.

“We all need to work hard to nourish the notion that we are one nation, sharing one identity, rich in culture, blessed by diversity, said the South Sudanese Church delegation. “Let us endeavour to build our nation on strong foundations of truth, justice, reconciliation, diversity and peace.”

After meeting immediate needs, Caritas will continue to work on rebuilding and reconciliation.

Caritas Internationalis is responding to this emergency in South Sudan through Caritas South Sudan, as well as CAFOD, Caritas Switzerland, Cordaid and CRS.