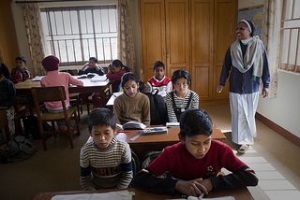 Faith-based organisations lay down AIDS roadmap at Caritas-UNAIDS meeting to strengthen collaboration and bring an end to HIV and AIDS.

In a Rome meeting organised by Caritas and UNAIDS this week, FBOs studied how to boost their work in giving life-saving care to marginalised populations in poor countries. They also looked at how to increase access to funding and resources to scale-up treatment.

“We are entering a new phase where we can see the beginning of the end of AIDS,” said Dr Luiz Loures, Assistant Secretary General of the United Nations and Deputy Executive Director of UNAIDS to the meeting’s participants.

“The faith communities have the scale, and have the means to move us forward. You care about dignity of the person – and it is only this unique combination of access to drugs and dignity that can provide the necessary drive to reach the end of AIDS.”

Loures emphasized that collaboration with faith based organisations in dramatically scaling up treatment is essential. He said that churches and other FBOs are the largest single group providing health care services for HIV, contributing up to 50 percent of facility-based and community care in some countries.

UNAIDS and other international agencies committed to facilitating national dialogues on the role of faith-based organisations in the HIV response at the Rome meeting.

Key outcomes of the consultation included increased research on the results of faith-based HIV treatment programmes, strategic communication about the good work done by these organisations, as well as more intensive networking and sharing of good practice models.

“Evidence shows the effectiveness of faith-based organisations engaged in treatment and support for persons living with HIV,” said Caritas Internationalis Secretary Genera Michel Roy. “But we cannot hope for the support we need if we do not communicate the compelling witness of what we do.” 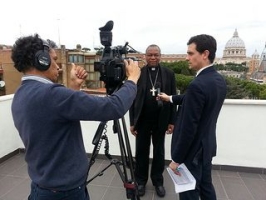 Cardinal John Onaiyekan talking to the media at the Caritas-UNAIDS meeting.

The Rome consultation was related to UNAIDS’ Treatment 2015 initiative which aims to reach at least 15 million people living with HIV with antiretroviral treatment by 2015.

“This consultation is a sign of the new era of collaboration, which focuses on the people in need,” said Cardinal John Onaiyekan, Catholic Archbishop of Abuja. “Where we manage to link hands, the impact far exceeds the sum of our individual efforts.”

The over 100 participants represented diverse Christian faith traditions, UNAIDS, Vatican offices, governments, the medical and scientific community, and the diplomatic corps accredited to the Holy See.

Challenges that were identified included the need for significant financial investment in treatment services, closing the gap in testing and treating children, technical capacity building, the inclusion of FBOs in decision making at national levels, and ensuring coordination rather than duplication of services in areas supported by multiple donors.

The Consultation was supported by UNAIDS, Caritas Internationalis, UNITAID, the United States Embassy to the Holy See, and CUAMM- Doctors for Africa. Co-sponsors include Global Fund to Fight AIDS, TB, and Malaria, Catholic Relief Services, and Ecumenical Advocacy Alliance.