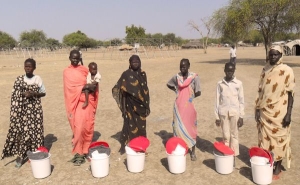 Caritas has been providing basic aid kits to these women displaced by the recent fighting in South Sudan. Credit: Caritas

“We stand at a decisive moment in the history of South Sudan,” said the Catholic bishops of South Sudan and Sudan at the end of their meeting in the capital Juba. “Fundamental choices must be made about how we deal with our past and present history, about how we govern ourselves as a nation, about how state institutions serve the poor.”

Thousands of people have been killed and more than 800,000 have fled their homes since fighting erupted in mid-December.

“Our vision of a liberated nation in which all people will be equal and live in peace appears to be shattered,” said the bishops. “Brother fought against brother, leading to so much unnecessary death and displacement.”

The bishops urged South Sudan’s leaders to implement a ceasefire between the government and rebels. “The ceasefire signed on 23rd January 2014 must be implemented in good faith. There are no excuses for not doing so,” said the bishops.

The bishops raised particular concern about the humanitarian situation in Malakal, the scene of recent fighting.

“The humanitarian crisis in Malakal is particularly acute and we appeal to all agencies, especially our own Caritas Internationalis family to support the vulnerable communities through all possible means,” they said.

Their concerns are echoed by Caritas. Doctors at the hospital in Malakal are reportedly overwhelmed by the huge numbers of people inside the hospital. They have no way of distinguishing between patients and those looking for shelter.

Beyond the immediate need to end hostilities, “there are no quick-fixes to the deep social divisions and trauma within our society,” said the bishops, calling for a process of truth telling about the violence.

The bishops highlight the causes of the current violence, which include the need for democratic reform, a lack of professionalism in government institutions, corruption and nepotism.

“Where are our Mandelas and Nyereres? Where are those who will lead us in re-founding this newly independent nation ,” said the bishops. “We must seize from the present crisis an opportunity to re-found our nation on democratic principles of dialogue, inclusion, and respect for diversity.”

They also called for the armed forces to be reformed and depoliticized. They urged for all combatants to respect international law on the protection of civilians.

“We deplore the manner in which children have been conscripted and recruited into armed forces during the current conflict. Children have no place in the conflict,” said the bishops.