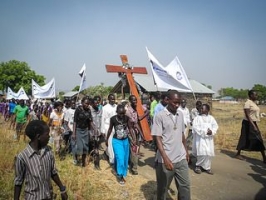 On my second day in the South Sudanese capital Juba, I have heard some of the stories of people escaping the violence that has engulfed the country. In the capital Juba, hidden from the hustle and bustle of a city slowly coming back to normal, are the stories of women and children who have borne the brunt of the suffering.

The streets of Juba can be deceptive to the stranger. They are full of life, signs of a city recovering from recent violent events. Gunshots which were a regular feature of life at night here, are slowly becoming rare.

In the dusty grounds of St Theresa Catholic Cathedral, I sat with women as their restless children tugged on their arms or legs, wanting to do something more than just sit around and talk. The women told me that their world has been turned upside down by the fighting.

Stella Jacob, an 18 year-old mother of three, gave birth to her six day-old son, Thomas Sebit, on her own. I met mother and baby, plus her two other children, inside the Cathedral compound where they are sleeping on the floor, in an incomplete stone building belonging to the Sacred Heart’s Sisters.

Covering her new-born baby with a mosquito net, Stella told me how she had to flee with her two other children in the middle of the night on December 15 last year when she was 8 months pregnant. “I didn’t even know the baby was due when I went into labour, and the baby came before my mother could summon help,” she said. Stella’s husband had gone to the military barracks for recruitment when fighting broke. She doesn’t know if her husband is dead or alive.

Behind the violence and political posturing, it is ordinary lives that are affected. Mary Abdalla Labalua, a single mother of 12 children, only returned to South Sudan two years ago. She wanted  to start a new life in her new country after living all her life in Khartoum in Sudan. She came back full of hope and bought a plot of land and built a new house. It was destroyed within two days of the fighting.

The situation is still tense. The ceasefire is fragile. People are not totally sure what is going to happen next.

I’m not able to travel far outside of Juba. But I have been able to speak on the telephone to Church partners in the town of Malakal. Sister Agnes Nyalik told me dogs and chickens were feeding on the rotting bodies of those killed in the fierce fighting for control of the town. I was told that floating bodies can be seen in the River Nile.

Doctors at the hospital in Malakal are overwhelmed by the huge numbers of people inside the hospital. They have no way of distinguishing between patients and those looking for shelter.

I was told food – mostly looted from shops and the warehouses of humanitarian agencies – are now being sold at exorbitant prices to anyone who is willing to venture into the streets of Malakal town.

I watched with pride from the comfort of my home in Nairobi as South Sudan peacefully embraced independence on July 9th 2011. Despite the horrors of the violence, the South Sudanese people still believe in hope, they still believe in their new country, they believe that peace and development is their future.

Caritas members have provided aid to people fleeing violence in St Theresa Catholic Cathedral, including water and household essentials.  Joseph Kabiru is CAFOD’s Africa News Officer based in Nairobi. CAFOD is a Caritas member for England and Wales.