A short walk to freedom in Central African Republic 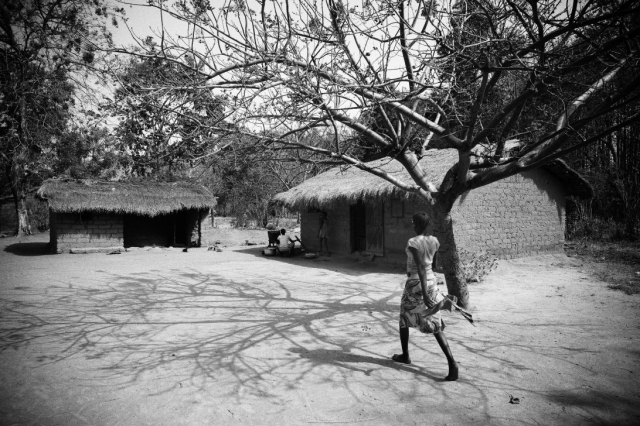 A woman walks to her home in Bossangoa. For months she had been hiding in the Cathedral. This short trip would have been too dangerous. Photo by Matthieu Alexandre for Caritas Internationalis

The thing that struck me most powerfully about returning to Bossangoa in the north of the Central African Republic after four months was that I could walk around without the fear of getting shot. I can’t imagine how this regained freedom must feel for the local people, released from six months of imprisonment.

Bossangoa had become a symbol of the terror created by Seleka militias. They seized the country in March 2013 and ousted the president, François Bozizé. They then launched a crackdown against Bossangoa, his home town, in September.

When I visited there in November, 41,000 people had sought refuge in the grounds of St Anthony of Padua Cathedral. Seleka men were encircling the camp, coming closer every day to its perimeter fence. There was a heightened sense of fear and claustrophobia.

Every night, an attack was expected. It could have been worse. Without Caritas providing the fuel for the generator, those people would have spent the night worrying in the pitch black.

Seleka left Bossangoa with the arrival of peacekeepers from France and more from the African Union. Since then, some of the people from within the Catholic compound have returned to their homes.

There were 25,000 people inside the cathedral grounds when I visited in early March (that figure has since decreased to 15,000 today). Many are too traumatized by the violence and don’t wish to return to their homes. Many have lost their relatives and are in a state of shock. Many have no homes to go back to as their villages are burned down.

Arriving at the compound is still astonishing. On paper the number of refugees has halved. Yet it’s difficult to judge what this means. It’s still very crowded, but at dusk I no longer have to climb over people lying on the floor.

Another difference is that I can go for a 15 minute walk in a straight line. If I’d have done that in November I would have left the camp’s safety and been at risk of being shot. I’m able to visit the home of a former resident of the camp. I can walk to the river. I notice there is a cotton factory for the first time.

My last visit was by air. When the small plane had landed on the strip and turned off its engines, the stillness was chilling. Usually in Africa, there would be some people meeting the plane and others selling fruits or drinks. In November, apart from the soldiers securing the runway and aid workers waiting for the weekly flight, there was not a soul.

On the short trip between the airport and the city centre, I saw many burned out houses and not a living thing. Nobody. When the car stalled, it was silence. A few days later I flew out, somehow miraculously whisked away from a nightmare.

This time, I came by road. It was a two hour 300km journey north from the capital Bangui, all under the escort of African Union peacekeepers. When our convoy arrived at the river, I decided to go the last kilometre by foot. It was a short, perhaps meaningless, walk but it meant everything to me.

The fear of being shot may have lifted. The Seleka vice has disappeared. The locals can move around now with freedom. But the level of distress remains large. Houses which aren’t burned down, are looted.

The people are left with nothing. I notice in the photos that they wear the identical clothes now as they wore in November.They need farm tools to cultivate their fields and grow food. The anxiety may have gone, but the humanitarian needs remain.

Diocesan Caritas Bossangoa is supported by CRS. They work with people hosted in the cathedral compound. They also work in the Ecole Liberté, a school where 7000 Muslims were seeking refuge, though now only 700 remain (most have gone to Chad).

CRS and Caritas are also providing aid in rural areas of Bossangoa, working in villages were over 70 percent of the houses have been destroyed or damaged. By early February, 3,500 rural households had received household items and tarpaulins.

Matthieu Alexandre is a photographer who visited the Central African Republic with Caritas in November 2013 and in March 2014.