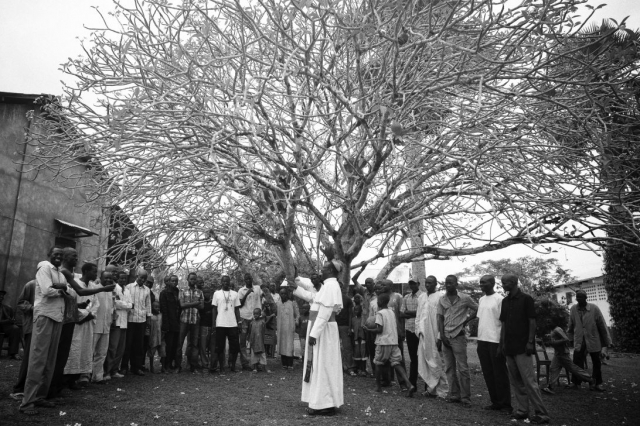 The Central African Republic has witnessed months of violence, where first ‘Seleka’ and now anti-Muslim ‘Anti-balaka’ militias have terrorised the local populations.The Catholic Church has been protecting Muslims there.

The town of Berberati in the Central African Republic once had 130,000 people. Now it has a population of only 45,000, including only 200 Muslims.

Three to four thousand Moslems have been escorted to Cameroon since January. Although the mission now only has 200 people living inside its walls, over 1,500 were there until quite recently.

Berberati is 450km east of the capital Bangui. It’s about a two-hour drive from there to the border with Cameroun. The convoys are escorted to the border by MISCA, the African Union peacekeeping mission.

Seleka left Berberati on 30 January. The next day a nearby town called Carnot was attacked by Anti-balakas. They set upon the Muslims population, who had nobody to defend them. Since then the bishop has asked the soldiers from MISCA to move inside the walls of the Catholic mission to act as protection to the thousands of Muslims who’d fled there.

Caritas is working both inside and outside of the Central African Republic to provide essential aid to those trapped by the conflict. Caritas has been funding community peacebuilding efforts and plans to create ‘youth peacemakers’ to improve relations.

The priest responsible for dialogue and reconciliation with the Anti-balakas has received death threats on several occasions.

“I’ve been held at gunpoint several times,” said the priest. “The Anti-balakas don’t view our action very favourably. They accuse us of collaborating with Muslims. They think we’re traitors”.

Msgr Denis walks around the mission garden, greets the guests and asks for news about those ill. The members of the Muslim community are gathered round the bishop near a magnificent forget-me-not in full bloom and together they exchange views on the situation.

Everyone agrees that the history of the Central African Republic has been marked by the diversity of its peoples. They stress that the bloody conflict is not a religious one. Christians and Muslims have always got on well together.

When Seleka took control, Christians were targeted by the Arabic-speaking militias, most of whom originated from Chad and South Sudan.

The Anti-balakas were set up as a reaction to attacks on the Christian community. The Seleka have now fled. The Christians are in greater safety. But the Anti-balaka have carried revenge attacks aginst Muslim communities. Months of violence, reprisals and general lawlessness have turned into a conflict in which Central African Republic populations oppose each other.

In Berberati, the Muslims risk being stoned by the local population if they go outside the walls of the Catholic mission. The neighbourhood around the main mosque is deserted. The shops that haven’t been looted are closed, and the streets are strewn with rubbish and burnt-out cars. It’s like a scene from a western film.

On its rounds a MISCA patrol comes across a young man dismantling a wrought iron gate. The convoy stops and they rush into the courtyard of the abandoned house. The young man is beaten up, falls to the ground, and is then kicked and hacked with a machete. His back is soon covered in blood.

My presence seems to dissuade the patrol from going any further. The leader of the patrol, noticing that I’m getting ready to take photos, orders that the man be put back on his feet. Only then am I allowed to take photos.

The young man is ordered to put the gate in the MISCA vehicle. With the wrought iron gate on his head he goes towards the pickup truck. He places the piece of wrought iron in the truck and gets into the vehicle. He’s taken to the police station.

“He was very lucky,” the priest tells me.