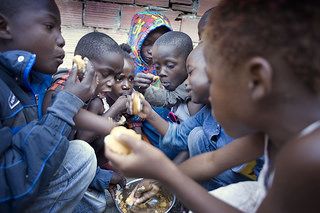 Lent is a call to taste people’s hunger and touch their poverty with our very fingers. Credit: Caritas

Many years ago, I used to teach math. But despite my mathematical training, there’s one equation that just doesn’t add up for me: the 85 richest people in the world have as much wealth as half the global population put together.

In his Lenten message this year, Pope Francis said, “When power, luxury and money become idols, they take priority over the need for a fair distribution of wealth. Our consciences thus need to be converted to justice, equality, simplicity and sharing.”

As we start on our Lenten journey, each one of us is invited to reflect on what the words of Pope Francis mean for us. What is justice? Where is there inequality? How can my life be more simple? With whom can I share?

Caritas Internationalis launched the ‘One Human Family, Food for All’ campaign before Christmas. The campaign offers an opportunity to answer Pope Francis’s invitation.

We believe that it is a fundamental injustice that over 800 million people in the world are hungry. These people wouldn’t be hungry if there were greater equality in wealth and resources were shared more fairly.

Each of us can live more simply, consume less, waste less and be more conscious of our choices. Sharing – our bread, our resources, ourselves – is the cornerstone of our faith and a solution to global hunger.

In the run up to Lent here in Rome, all the children dress up for the tradition of ‘carnivale’. The face of Jesus Christ is also present in many guises and we may not recognise him at first glance. We may ignore his call if we’re not attentive.

“He does not reveal himself cloaked in worldly power and wealth but rather in weakness and poverty,” said Pope Francis.

Lent is a call to taste people’s hunger and touch their poverty with our very fingers.

It is a time to join hands with our brothers and sisters who are part of the 3.5 billion poor in the world. As the Americans would say, it’s time to “do the math”.

Please support the Caritas One Human Family, Food for All campaign to eliminate global hunger by 2025.

You can act by donating online at www.caritas.org or by doing something large or small in your community to help the poor and vulnerable.