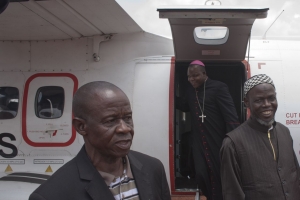 Msgr Dieudonné Nzapalainga is driving. Alongside the Archbishop of Bangui in the passenger seat is a MISCA soldier from Rwanda, part of the regional peacekeepers.

On the back seat, flanked by two Rwandan soldiers, is Imam Oumar Kobine Layama, the religious leader of the Muslim community in the Central African Republic.

The 4×4 leaves the archbishop’s palace, where the iman has been sheltering since the events of 5 December last. They’re heading to Bangui’s M’Poko airport.

They are joined at the airport by Franco Mbaye-Bondoi, general secretary of the Evangelical Alliance of Central Africa.

The three men are the founders of the inter-faith platform that is seeking dialogue and reconciliation.  Ministers and army officers come to offer the archbishop a respectful greeting.

An airport managers whispers in my ear, “The archbishop is very popular, you know. People think very highly of him. Without him the country would undoubtedly have been destroyed. People see hope in him, more than they do in the president.” 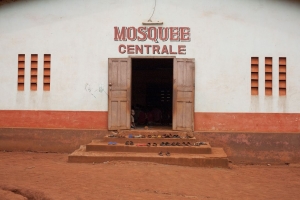 Shoes are pictured at the entry of a mosque in Bangassou. Photo by Matthieu Alexandre for Caritas Internationalis

During the flight the three men pore over a map in preparation for the tour they’re about to do in the west of the country, more than 1,000 kilometres away by road this time.

After flying for 1 hour and 45 minutes, the UN plane lands on the earth runway of Bangassou airport, 738 kilometres east of the capital.

Bangassou, a town with 36,000 inhabitants, is the birthplace of Archbishop Dieudonné. Indeed, the school he attended as a child is the venue for the peace and reconciliation meeting.

Catholics, Protestants and Moslems are sitting at the desks. “We’ve never had any inter-communal problems here,” said a local priest. “Christians and Muslims get on very well together and trade with each other. There are even cases of mixed marriages.”

In different parts of the country, it seems that the presence of the Seleka militia hasn’t had the same impact. Seleka seized power a year ago in March.

[Tweet “”Muslims and Christians side by side have made #CAR a country rich in diversity.” Msgr Dieudonné”]

While the entire population has been terrorised and assaulted, in some regions this has led to communities rising up against each other. That’s not the case in Bangassou.

“Even Altaïr, a Muslim shopkeeper originally from Chad who’s been settled here for over 20 years, who collaborated with the Seleka by pointing out houses and shops that might be worth looting, continues to live here without being troubled by the local population,” said one of the participants in thr forum. 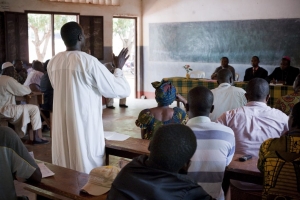 A muslim speaks during a meeting with the religious leaders in Bangassou. Photo by Matthieu Alexandre for Caritas Internationalis

This longstanding harmony is precisely at the heart of the message the Archbishop of Bangui has just delivered.

“For a long time Muslims and Christians have lived together side by side and made the Central African Republic what it is today – a country rich in religious and human diversity. We shouldn’t allow these values of harmony to be lost,” he said.

One might think he’s preaching to the converted. But it goes further than that. He’s given the local people a chance to speak, so that they can ensure their own harmony.

They take turns to speak. Muslims and Christians talk about their experiences. Most of the dialogue takes place in Sango. But I’m told that the message is often the same. All they want is to live in peace.