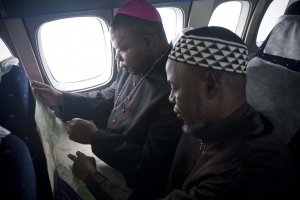 After descending into chaos, the Central African Republic is seeing its Muslim population vanish. Those who haven’t been killed by militias are fleeing the country.

The religious leader of the Muslim community in the Central African Republic, Imam Oumar Kobine Layama, says in the capital Bangui only 8 of the 36 mosques are still standing and that 80 percent of Muslims have fled the country.

Before heading to the United Nations in New York on the 13 March, they both travelled up and down their country to meet the people.

They went to Bangassou, 780 kilometres east of the capital, to bring together Christians and Muslims in a dialogue and reconciliation meeting.

“The history of the Central African Republic has been marked by the diversity of its people. Christians and Muslims have always traded together and lived alongside each other in harmony,” said Archbishop Dieudonné. 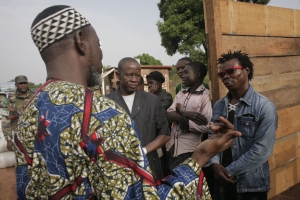 “The country cannot rebuild itself in the absence of one of these two communities. Not only must peace be built, but the Muslims who’ve fled the country must also be persuaded to come back home,” he said.

The two religious leaders then drove more than 1,000 kilometres through remote villages in the north of the country, with the archbishop at the wheel of his 4×4, escorted by armed soldiers from the African Union peacekeeping mission (MISCA).

In Bossembélé they came across still well-armed Anti-balakas militias who have erected roadblocks to extort money from the goods convoys on the main road leading from Cameroon to the capital.

In Pahoua, near the border with Chad, they passed through towns that have experienced the worst of the violence, with more than 25,000 displaced people living in a makeshift camp near the cathedral in Bossangoa.

On the way back to the capital the two men saw schools that are slowly restarting classes in Bozoum, as well as razed villages and burnt-out mosques on the road to the hospital in Bossentélé, which every day is still taking in Muslim victims of acts of violence.

“We saw villages that have been burnt down and wiped off the map, towns emptied of their Muslim residents, and many others that are still dealing with insecurity, where many warlords are still present. People are still living with fear in their hearts,” said Archbishop Dieudonné.

The two men remain optimistic. The situation in the Central African Republic is very diverse. The reactions among the two religious communities haven’t been the same everywhere.

In the east of the country, especially in Bangassou, there are still mosques open for prayer every day, Muslim markets in full swing, towns with female Muslim mayors and places where Muslims and Christians live harmoniously alongside each other. 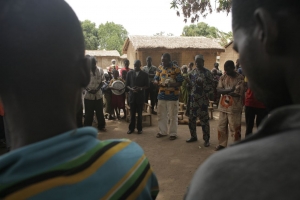 The archbishop, the pastor and the imam prey for peace with villagers in a remote part of the Central African Republic. Matthieu Alexandre/Caritas Internationalis

In the far west of the country, however, in Berberati, the 200 Muslims still there are staying inside the walls of the Catholic mission. The population, who are Christian, wants to kill them. The mosque is still standing but deserted, as are the looted shops and houses in the Muslim neighbourhood.

The peacebuilders continued their work in the United States. After their meeting last week with the Secretary General of the United Nations, Ban-Ki Moon, about UN peacekeepers in the Central African Republic, the three religious leaders arrived in Washington where they met members of Congress.

They are flying to celebrate mass in Notre Dame cathedral in Paris on 28 March and will also be expected in Rome later in March.