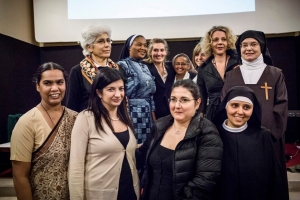 It has the smallest population of women in any country in the world –around 30–  but that didn’t stop the Vatican celebrating International Women’s Day on 8 March.

The ‘Voices of Faith‘ event in the Vatican marked the positive social contributions of Catholic women around the world. It was also the perfect occasion for Caritas Internationalis to announce the launch of the ‘Women Sowers of Development Prize’.

As part of its One Human Family, Food for All campaign, the prize honours women who are agents of change in their communities. Caritas Internationalis Director of Policy and Advocacy Martina Liebsch said the prize will embrace both rural and urban communities, its goal is to “encourage women to be creative” in feeding the planet.

Both the prize and the Voices of faith event were sponsored by the Fidel Götz foundation.

Nearly 80 participants gathered at the Cinema Vaticano located just some steps away from Santa Marta, where Pope Francis lives. Participants heard the stories of ten outstanding women from different nationalities and backgrounds. Each speaker had the common aspiration of creating a positive impact among society.

The first told the history of Nuovi Orizzonti, an Italian organisation founded by Chiara Amirante. Spiritually moved by the Gospel’s commandment: “Greater love has no one than this, that one lay down his life for his friends” (Jn 15, 9-12), this young girl went out to listen to young people involved with drugs, alcohol and prostitution.

Chiara started to love them, realising that these people “were just unloved”. With the idea of creating a welcoming community following “a rule of Gospel life”, the first guesthouse opened. It was filled with mattresses on the floor, but that experience marked a new way of life for today’s more than 200 centres in Italy and abroad.

Katrine Camilleri started her speech narrating a tragedy of another “journey of hope” in Mediterranean waters, in which a boat sank causing numerous human losses, including many children. Some survivors were taken to her homeland, Malta, where she had the opportunity to meet them.

Katrine is a human rights lawyer who advocates for refugees and asylum seekers, her main focus in recent years is helping detainees. She spoke of a “rationalized discouragement” since “nothing seems to change after many years”. But, when she looks back in time, faith has been her strength, and she believes that “God will do infinitely more than I can do”.

“Detainees have been a never-ending source for enrichment,” she said. She also felt inspired with Mother Theresa’s famous quote: “We ourselves feel that what we are doing is just a drop in the ocean. But the ocean would be less because of that missing drop”.

Another precious testimony involving asylum seekers came from Sr. Aziza, an Eritrean Comboni sister in the Holy Land. With a visible tattoo on her forehead in a shape of a cross, she almost moved herself to tears when telling the horrific stories about the Sinai torture camps, where people get traumatized during their journey to Israel.

“Only God can help people with wounds in mind and heart,” she said. “This new slavery has to end”.

The suitably named nun, Sr Caritas, educates children in Nigeria. She began and concluded her speech singing and dancing Nigerian songs, making the audience clap hands with her.

Sr Caritas said, “We live in a small house. There is no road, no electricity, we use lanterns”. She tells the children “If you want to be like Sister Caritas, you have to be educated”.