A widow in need of food in the Philippines after Haiyan 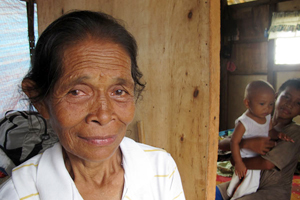 Violeta Ofianga is living with her children and grandchildren – 10 people in all – in what remains of her house. Caritas gave them a tarpaulin to cover where their roof had been and keep the rain out. Credit: Nick Harrop/CAFOD

Violeta Ofianga is a 66-year-old widow who lost almost everything she had to Typhoon Haiyan on Friday 8th November 2013.

Haiyan was the strongest tropical cyclone to ever make landfall – at a speed of 195 miles per hour. Powerful gusts of wind came, wreaking havoc at 235 mph. The seas around the hard-hit Visayas islands surged 13 feet.

A 30-mile wide swath of destruction was carved through the heart of the nation. From 70 to 80 per cent of anything in the storm’s path was demolished.

She’s very thankful for Caritas’ help in both giving her shelter and – importantly – food supplies – which she could not afford.

“The food has helped us to keep going, to not give up hope. I also get strength from the love Caritas shows us and this makes me stay strong for my grandchildren. Without this strength and hope we would really have gone hungry – in our bodies and our souls.”

Violeta and her children and grandchildren – 10 people in all – received rice from Caritas – the Philippines staple food. It kept them alive.

Violeta used to make money fishing for squid, but now the boats, which she used to hitch a ride on, are no longer putting to sea.

They’re either damaged or destroyed. The price of fish is consequently very high in Violeta’s coastal village of Madridejos on Bantayan island, so Violeta will also try to grow vegetables now.

The extended family is crowded into a temporary shelter – Caritas gave them a tarpaulin to make a roof.

Violeta weeps when she remembers the violence of the storm and what she has lost. But she cheers up when one of her grandchildren comes onto her knee to give her a hug. “It’s not like my old home but at least we have all survived and we are not going hungry.”

The emergency phase of the relief operation is now over. Caritas and its partners are looking to the future. That’s not just in terms of rebuilding homes and schools and kick-starting the livelihoods of small farmers and fishing families.

The work is also about helping people diversify their economic activity into several new areas – so they are not so dependent on one thing. 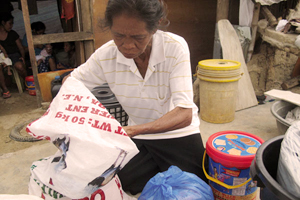 In addition to shelter, Violeta has received help from Caritas – health and sanitation equipment and bags of rice. It’s helped the family make it through. Credit: Nick Harrop/CAFOD

Susan Connelly, a monitoring and evaluation officer from Catholic Relief Services (a Caritas member from the United States) is using new technology in the form of a hand-held tablet to keep track of beneficiaries in a CRS livelihoods programme. “We’re focusing on rural areas and households which depend on coconut farming,” she says.

“It’s really tough for them as they won’t have any income until new trees have grown to replace those felled by Typhoon Haiyan. To help them meet their household bills we’re establishing vegetable gardens,” Susan adds.

“We keep track of what they’ve received and how they’re progressing – or if they’re really struggling and we need to do something else to help – by using this quick method of data collection and transmission.”

Climate change experts from the United Nations recently highlighted the Philippines as one of the countries likely to suffer the most from the warming of our planet. It has low-lying shores, sits in an area prone to storms and has already seen its temperatures change. Its rainfall in increasing.

Even with a long history of typhoons, Haiyan must serve as an early warning of the resilience which will be needed to stop the poor being put back to square one every typhoon season.