One million in 100 days flee homes in South Sudan 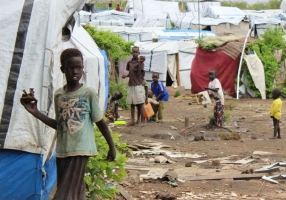 The UN House Juba 3 IDP camp is home to 16,000 people who have fled the violence. Photo by Faith Kasina for Caritas

A slight cough from her little boy distracts 25 year old Salome Amira from the bucketful of soaked clothes she is bent over. She briefly extends her gaze to him and then gets back to work.

“You can never be too careful,” she said. “I feel safer than where I came from because there are many people around, but you have to be alert.”

Salome, her husband and their one-year old son Given had to flee their home in the South Sudanese capital Juba after war broke out in mid-December 2013.

“I’m originally from the north but have lived in Juba since 2010. My perfume business was going well and I soon got married,” she said.

“My husband and I are from different tribes. We had to run away to save our lives and that of our son. I was afraid for my son because he’s seen as an ‘enemy of the future’ [with parents who speak different languages],” she said. 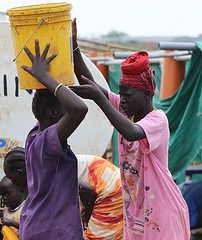 It’s a humanitarian crisis on the same scale as the conflict in Syria, says the UN. One million people in 100 days have fled their homes in South Sudan. Most remain within South Sudan, with over 200,000 fleeing across the border.

About 3.7 million people, close to one-third of the total population, are already at severe risk of starvation in South Sudan.

Caritas South Sudan Executive Director Gabriel Yai said, “We urgently need food, water, seeds and farming tools so people can plant crops before the planting season ends in late May. The clock is ticking and we don’t have the resources to meet the needs.”

Caritas organisations are responding through local humanitarian and Catholic church-based partners. Aid includes plastic sheeting for shelter, kitchen sets that include cutlery and cooking pots and hygiene kits such as laundry and bathing soap.

However, a €2.9 million Caritas Internationalis emergency appeal for South Sudan to provide 100,000 people with aid over the next 4 months is only 20 percent funded.

“Fighting is continuing. The crisis is not about to end,” said Gabriel Yai. “We need the resources to act quickly and scale up response activities in the accessible areas.”

At the Juba 3 IDP camp, children sculpt guns and war tanks while playing with mud. Most of them almost naturally show the gun signal with their fingers. Others openly speak of avenging the deaths of their loved ones.

“Most of these children have seen their parents being killed by people they know,” said Salome. “If we don’t take care of them, they will definitely revenge when they are older. There will always be fighting. It will never end.” 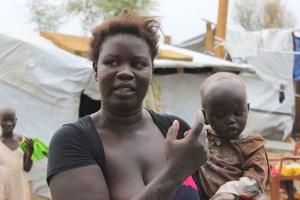 Salome Amira and her son Given are among the one million people who have been forced from their homes. Photo by Faith Kasina for Caritas.

Sr Amala Francis works with the Doctors of Mary Immaculate (DMI) Sisters in the camp, supported by a Caritas. She sees the children as the start of a new life for future generations.

“The children we meet everyday have their minds poisoned with revenge as most of them openly talk about avenging the death of their family members,” she said.

“Through the education we give them, we encourage them to let go of the gun and pick the pen as they are the future of South Sudan.

“We also work with local communities in identifying ways they can engage in to enhance their contribution to the national peace-building and reconciliation.”

The sisters have been assisting these families with food relief as sorghum and fresh milk. There is however need to scale up response and recovery activities in this camp as well as other accessible conflict-affected areas, in order to save lives.

Salome may have had her plans of becoming a lawyer with a thriving business and a stable family, robbed by guns and bombs; but she’s not about to throw in the towel for her son.

“I may have lost everything- my business, my home. But I have new strength for my son,” she says. “As long as I’m alive, Given will get a good education and will one day become a doctor.”