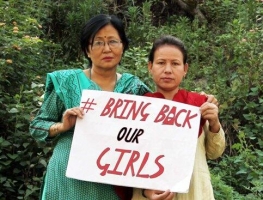 Bishop Lucius Iwejuru Ugorji of Umuahia is the Chairman of the Catholic Bishops of Nigeria’s Department of Church and Society. He writes about the need to address the root causes of poverty and bad governance in Nigeria if the country is every able to overcome the threat from terrorists.

The abduction of over 200 schoolgirls in Chibok and their continued captivity for weeks have rightly received mounting worldwide outrage and condemnation.

Equally worthy of condemnation is the purported “conversion” of the girls into Islam by the use of force. It is appalling that the members of Boko Haram, who engage in such criminal acts of terrorism aimed at throwing the nation into chaos, seek to justify them as a religious duty undertaken in the name of God.

They try to “re-create” God in their own fancy, fashioning Him into an “idol”, to be used for despicable evil purposes. By their bizarre claims of acting in God’s name, they profane religion and abuse it.

It is wrong to use religion as a cover for political, economic or ideological causes. When extremists of any religious tradition radically distort their professed faith in order to justify violence and hatred, they do a great disservice to religion.

Whatever the motivation and whichever way one looks at it, there can be no moral justification for targeting innocent, defenceless people.

Action for the girls and their families

Our hearts are drawn close to the young girls. No doubt, they are experiencing unspeakable trauma in captivity. We pledge our prayers for their safe and unconditional release and for the change of heart of their captors.

In a spirit of solidarity, we also unite with their parents. Distressed and broken-hearted, they anxiously look forward to reuniting with their beloved children soon. May their hope not be in vain.

This is a great moment of trial for Nigeria, when the eyes of the world are turned on our nation. It is a time when all Nigerians should remain focussed and join hands to do all that it takes to ensure that these schoolgirls are freed unharmed.

It is not a time of buck-passing. We must resist those who want to exploit the present situation to antagonise one religion against another or pit one ethnic group against the other.

The great threat of Boko Haram terrorists should not be underestimated. Their murderous suicide tactics, combined with their guerrilla modes of operation, consisting in “hit” and “hide” strategy, make them extremely unpredictable and dangerous.

We commend our security agents, who put their lives on the line to contain them, despite all odds. Their continuing priority must be to ensure that military force is directed only at those who use terror and those who assist them.

Everything possible must be done to minimise or totally avoid civilian casualties. Security agents have a grave moral obligation to respect the principle of non-combatant immunity even in guerrilla warfare. Indiscriminate attacks on innocent people, their mass arrest and torture cannot be morally justified.

Using the services of intelligence officials, government should do more to unmask and hold accountable those individuals and groups responsible for the dastardly acts of terror in the country.

Poverty and corruption must be addressed

Above and beyond, it should make a serious effort to uncover the grievances of the Boko Haram insurgents as well as the policies and problems that provide fertile grounds in which terrorism thrives.

No doubt, young people carrying bombs and other deadly weapons to blow up themselves and others have been pushed to desperation by poverty and hopelessness. The anger and resentment in their hearts are deep and arouse their most destructive impulses.

Terrorism will go on in our nation as long as its underlying causes remain unaddressed and the structures of inequality are not dismantled.

The grinding poverty among the almajerins, especially in the North East, intolerable extremes of hardship and misery, the growing gulf between the “have” and “have-nots”, the lack of participation of the vast majority in political life, the abuse of human rights, endemic corruption and threats to local cultures by the forces of globalisation, aided by powerful media are sources of deep resentment and anger, which terrorists seek to exploit for their own ends.

The needs of the jobless, hungry and homeless cannot be ignored or neglected without dreadful consequences. The government should wage unrelenting war against poverty, ignorance and corruption at all levels. No doubt that there will still be people of hate and violence, but they will have fewer allies, supporters and resources to commit their heinous acts.

As citizens of this nation, we must be united in insisting that politics is not simply a tool for grabbing power and using it in the selfish interest of the rulers and their cronies. We must all rightly see government as a mechanism for installing a just society that ensures the overall welfare of the populace.

An incompetent government, debilitated by corruption and lack of concern for the welfare of its people, provides a fertile ground for all kinds of lawlessness. In this regard, the Nigerian nation has a great challenge before it. We must learn the culture of justice, equity and tolerance or perish together through violence and mutual destruction.

Caritas Nigeria works with civil society partners at national, state and local government levels to advocate for good quality and affordable basic education for all children. Caritas Nigeria also works with the Catholic Diocesan Education and Justice and Peace Commissions to place orphans and vulnerable children in schools or provide them with alternative forms of education.