Born in conditions like Jesus in manger in Central African Republic 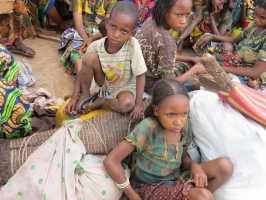 The archbishop has just visited the town in the west of the country, 200km from the capital Bangui. He says over 500 to 700 Peuls (Muslim herders) are in desperate need there. He says the conditions there are inhumane and dramatic.

“What is happening in Yaloké is a tragedy,” he said. “Women and children are living in a tiny unhygienic space. Conditions are appalling. They are in terrible poverty.

“We recorded three births in two days in conditions similar to Jesus in the manger. Aid must reach them immediately. We must help them regain their human dignity.”

A breakdown in the rule of law and widespread violence has seen 600,000 people forced from their homes in the country.

Many of them are Muslims fleeing attacks from ‘Anti-balaka’ miltias drawn from the Christian population. 20,000 Muslims remain directly threatened, many being protected by the Catholic Church.

Humanitarian conditions across the country are desperate, with half of the population in need of aid. The number of children being treated for severe acute malnutrition has tripled at the Bangui Pediatric Hospital since the beginning of 2014.

The herders in Yaloké fled Boda and M’Baïki in the south. 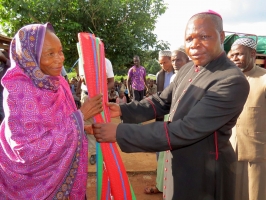 “They need security, healthcare, food, shelter and clothing,” the archbishop said, calling on the international aid community to help. “The Caritas is able to provide some food, but it is a tiny amount compared to the need.”

Archbishop Dieudonné Nzapalainga rejects any proposals to relocate the Muslim herders in the north of the country.

“We must combine our efforts to ensure peace happens. Relocation means we will face the same problems in the future,” he said.

Caritas is working with Christian and Muslim religious leaders in the Central African Republic to bring communities together that have been ripped apart by conflict.