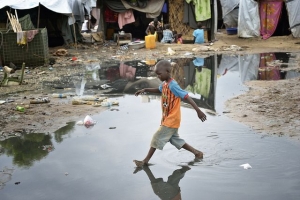 A boy navigates a flooded portion of a camp for internally displaced families located inside a United Nations base in Juba, South Sudan. Photo by Paul Jeffrey for Caritas

Five months after the onset of the crisis in South Sudan, approximately 4 million people are still reeling from the effects of a political difference that quickly turned tribal.

Families have lost their homes and loved ones, forced to seek refuge in often crowded settlements for the internally displaced.

The rains have now started in most parts of the country but farms remain unploughed. If farmers cannot go back to their farms, the country is staring famine in the face by the end of the year.

Caritas agencies in South Sudan and through the Catholic Church continue to deliver aid to the most vulnerable, having reached over 10,000 families with food, plastic sheeting for shelter, household items and sanitation facilities in different parts of the country.

Caritas member organisations have also scheduled recovery responses and are distributing seeds and tools that will enable families to tend their lands hence increase their ability to be food secure in the coming months.

Caritas South Sudan’s Executive Director Gabriel Yai said, “Despite the recent signing of a peace agreement by the warring parties, and cessation of hostilities, the trickle down of the truce to the field commanders has been poor and thus civilians are still being affected by sporadic fighting, especially in the Upper Nile and Unity State states, greatly impeding humanitarian access.

“To most affected populations, the signing of the peace agreement remains unknown and unheard of as the information and news hasn’t trickled down, thanks to poor electronic media penetration in most areas outside of major towns and the fact, the few who had radios, have lost them during the fighting.

The UN estimates that 60 pecent of the country will be inaccessible during the rainy season, due to poor road conditions. This means thousands of families will be out of our reach. 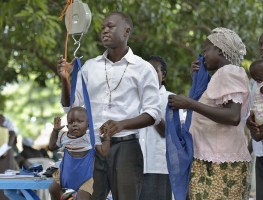 Hassan Gama weighs a baby in Nimule, South Sudan, during a mobile clinic run by Caritas of the Diocese of Torit. Photo by Paul Jeffrey/Caritas

There is now an outbreak of cholera in five Payams (administrative divisions) in Central Equatorial State with a reported 188 cases and 10 fatalities as of 20 May 2014.

The reality is the situation is bound to get worse the time to act is now says Caritas South Sudan.

“To date, only 25 percent of the $ 4 million Caritas appeal launched in February 2014 to respond to the South Sudan crisis, has been funded. As we acknowledge our donors’ efforts thus far, we continue to call for increased support to bridge the funding gap, to enable Caritas as well as other humanitarian agencies save lives of innocent civilians caught in this deadly crisis, ” said Gabriel Yai.

Caritas remains committed to saving lives and alleviating suffering for the most vulnerable and displaced families in South Sudan particularly in those states worst hit by the crisis.