Caritas Internationalis is a supporter of the Global Campaign to End Immigration Detention of Children. 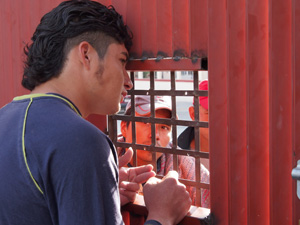 In too many other countries, both European and non-European, children are still detained for the sole reason of asking international protection or for being on the territory without permission. Credit: Worms/Caritas

When Caritas Internationalis asked me to represent the confederation at the Side Event on Ending Child Immigration Detention in the context of the 26th regular session of the UN Human Rights Council (Geneva, June 19th 2014), I was very enthusiastic to do so. It is always a great opportunity when one can connect field experience with the policy and advocacy level. As a legal advisor for Caritas Belgium, I visit the Belgian immigration detention centers and offer legal-procedural and psychosocial assistance to the detainees. Fortunately, I have never had to see children in detention as Belgium decided to end child detention in 2009. In too many other countries, both European and non-European, children are still detained for the sole reason of asking international protection or for being on the territory without permission. Therefore, high level advocacy events like this one, aimed at raising awareness about the traumatic effects of detention on child migrants and promoting the use of alternatives to detention (ATDs), are crucially important if one day, we effectively want to witness a global cessation of child detention worldwide.

The side event was jointly organized by the International Detention Coalition (IDC), Terre des Hommes, the Platform for International Cooperation on Undocumented Migrants (PICUM), the Destination Unknown campaign and the Global Campaign to End Immigration Detention of Children. It was sponsored by the Permanent Missions of Italy and Mexico, and chaired by Ignacio Packer from Terre des Hommes.

The first speaker, Mr. Farah Abdullahi Abdi, gave an authentic testimony of his personal experience as a child detainee. Originally from Somalia, Farah left his homeland to Kenya at the age of three. He left Kenya when he was 16, passed through several countries including Libya, where he was put in prison, and crossed the sea in order to reach Europe. “Malta chose him”. He spent six days in detention in Malta and called it a horrible experience. After being granted international protection, Farah decided to speak up publicly against the harmful practice of child detention. He has a blog, regularly writes and speaks about what he went through, and advocates for a world free of child detention. “Migrants are not a burden but a human resource, an investment”. Instead of seeing them as victims, we should regard them as survivors, “able to make a valuable contribution to society”. The audience witnessed a young man full of energy with a warm smile, humoristic, determined to tell his story to the world and contribute to change.

The Ambassador of Mexico, Mr. Raúl Heredia, recognized the severe mental and physical effects of detention on children. He spoke about the protection model developed by Mexico for child migrants, whereby Protection Officers are tasked with guaranteeing the fundamental rights of children. The UN Special Rapporteur on the Human Rights of Migrants, Mr. François Crépeau, highlighted the rapidly growing attention for the issue of child immigration detention, both in respect of the impacts on children’s mental and physical health, and what concerns the need for alternatives to detention. While the issue was covered by some few “usual suspects” (NGOs) five years ago, today it is on the agenda of a large range of national and international NGOs, United Nations bodies, and other institutions. Also in his own work, child immigration detention is at the forefront. During field visits carried out by himself, Mr. Crépeau saw unacceptable situations. In Greece, for example, family members were separated and allowed to reunite during one hour per day. In Sri Lanka, a detained girl had been deprived of schooling for more than two years. Often he witnessed a lack of proper sanitary, child activities and proper food. Because child detention can never be in the child’s best interest (cf. article 3 of the Convention on the Rights of the Child), it is difficult to see how it can not constitute a human rights violation. Alternatives to detention should therefore always be used for children, and if political will exists, this is easy to apply in practice. The Special Rapporteur urged states to put limits on states’ power to decide freely upon their sovereign right to manage migration – which, he specified, is something different from pleading for open borders. In five years’ time, no children anywhere should any longer be in detention.

After these presentations, it was time for the audience to contribute to the discussion. We heard civil society organizations mentioning the problematic lack of global numbers on child detention, and highlighting the urgent need to deal with those children in detention today and tomorrow apart from working on a political agreement aiming at ending child detention in the future (PICUM). Even if conditions in detention are decent and physical or mental abuse of children is absent, child detention remains a human rights violation and therefore unacceptable whatever the circumstances (IDC; Human Rights Watch). Good-practice examples from states around the world, who are exploring and implementing child-sensitive alternatives to detention, were discussed, including the development benefits of implementing these alternatives (cost savings, more efficient migrant processing, and high rates of compliance). The Office of the High Commissioner for Human Rights (OHCHR) denounced the notion of “illegal migrant” and recommended the use of “irregular migrant” instead. The Representative of the Libyan mission to the UN expressed Libya’s need for assistance, as a transit country, in respecting children’s rights, and therefore called for cooperation and dialogue.

So what has been the outcome of the side event? Clearly, it has raised global attention for the issue, both among civil society organizations and state representatives. Also, the calls for cooperation and dialogue by state representatives have been heard and welcomed by the civil society organizations, who expressed their willingness and intention to work on support mechanisms for (transit) countries confronted with high numbers of child migrants. Together with the focus on good practices, this created a positive, constructive atmosphere.

Ending child immigration detention should be more than a utopian pursuit. Through multi-agency cooperation and effective dialogue between all stakeholders, putting an end to this harmful practice is an achievable target by 2020. Very importantly, migrants should be involved in the policy making processes that affect them. As the Special Rapporteur rightly mentioned, the higher, political level often lacks a clear understanding of the realities on the ground. In order to connect these field realities with the policy level, migrants themselves should have the opportunity to “nourish” that level with their personal experiences. In this regard, the intervention and testimony by Farah at this high level UN event was truly valuable and indicates that we are on the right track.