Strength, courage and confidence on the migrant journey from Bangladesh to Italy 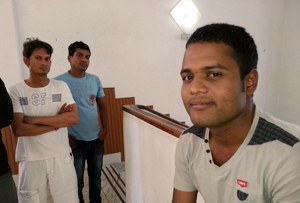 If I get my papers I hope to have a bright future because I’m living in Europe,” says Aashif (far right). Credit : Hough/Caritas

Eleanor Roosevelt apparently once said, “You gain strength, courage and confidence by every experience in which you really stop to look fear in the face.”

I met someone in Sicily last week who reminded me of this saying. I was visiting a minor migrant centre in the port town of Augusta which Caritas helps run. Tens of thousands of migrants are risking their lives to cross the Mediterranean in overcrowded boats, and sometimes before that, the Sahara desert.

Aashif* is 21 – not quite a minor migrant, but very young to be facing what he’s facing. He travelled from Bangladesh to Libya, from where he wanted to get into Italy.

He explained to me why he left his country, “My family’s so poor. I have three brothers and two sisters. I’m the eldest. My father has no work. I have to support my family.”

Aashif was working in a shop in Bangladesh but he didn’t make much money. He decided to come to Italy because “Italy is the centre of Europe” and from there he felt he could go to other countries if he didn’t find work. His mother cried when he said he was going to leave but he felt Bangladesh had nothing to offer for him so he said “Maybe I die, but no problem.”

He said Libya was dangerous and decided to leave after he was held up at knife-point and robbed. A Bangladeshi friend introduced him to a trafficker who got him on a boat to Italy. The trip cost 2000 dinar (€1,100).

There were almost 400 people on the small boat. There was no room to lie down, nor any food on the journey.

“I spent my time praying to God and crying because water was coming in the boat,” said Aashif.
The Italian navy picked them up after three days and gave them food and water. After 366 migrants drowned at sea near the Sicilian island of Lampedusa in October 2013, Italy launched the “Mare Nostrum” programme as a stop-gap measure. This is where the navy rescues migrants from often-unseaworthy vessels not long after they set sail from Libya.

The younger migrants rescued along with Aashif were taken to the minor migrant centre in Augusta run by the local council. There are 114 migrants from Bangladesh, Pakistan, Egypt, Syria, Malia, Gambia, Eritrea and Ghana.

Caritas provides clothes, Italian and geography lessons and some of the food. The migrants should stay in the centre just a few days, but Italy is struggling to find longer-term accommodation for migrants because so many have been arriving.

The Italian government has said that 43,000 migrants crossed the Mediterranean in the first five months of 2014. This already equals the total number who arrived in the whole of 2013.

Oliviero Forti, head of Caritas Italy’s immigration desk recently called for a “humanitarian corridor” to ensure the safety of migrants travelling from North Africa to Italy. He also urged for action on a Europe-wide level because the massive numbers of migrants means Italy cannot face the issue alone.

Aashif says his main problem at the moment is he doesn’t have enough cream and his skin his sore. He’d like better-fitting clothes and more food too.

One of the centre’s doctors said, “Many of the migrants come here with skin problems after having had such a long journey under the sun and without water. They have coughs, headaches and aches and pains from being in such cramped conditions on the boats.”

Francesco Mudano, head of immigration for Caritas Siracusa which covers Augusta, said, “Migrants think that once they reach Italy, their problems will be solved, but this isn’t the case. While migration across the Mediterranean is responded to as an emergency, there will be no change. It is vital that Italy gets European support so it can set up systems to cope with the vast number of migrants arriving.”

Aashif feels down after five days in the migrant centre and having to wait to be sent elsewhere in Italy. He wants to get his documents and start working and to take his future in his hands. He’s thoroughly convinced that he’ll one day be successful and will be able to send money back to his family.

“If I get my papers I hope to have a bright future because I’m living in Europe. This isn’t Asia. This is so developed compared to other countries,” says Aashif. “If the Italian government helps me and gives me my documents I have confidence that I’ll have success in my life and I’ll build up my future.”