Syrian refugees need a safe passage to other countries 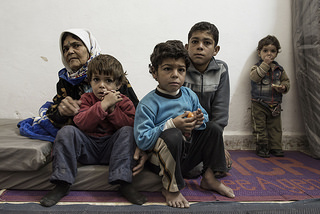 Yahia and his family found a place to stay in Zarka, a town north-east of Amman. He must pay around 160 Euros for rent, electricity and water. Caritas takes care of his bills and gets him the medicine he needs. Credit: Romenzi/Caritas

On World Refugee Day, Caritas urges nations around the world to give Syrian refugees a humanitarian entry visa to help guarantee their safety and well-being as they flee the war in their country. [Read Message by Msgr Antoine Audo, president of Caritas Syria]

Countries bordering Syria are increasingly strained by the numbers of refugees they are hosting. Lebanon has 1.1 million refugees, Turkey over 700,000 and Jordan over 600,000, according to the UN refugee agency (UNHCR).

Martina Liebsch, head of policy and advocacy at Caritas Internationalis, says, “We risk becoming indifferent to the plight of Syrians who have left their homes and lost everything. They need food, water, clothes and a safe place to lay their heads at night. The only way to create the foundations for peace is to start to take care of the material and spiritual well-being of our sisters and brothers who are in difficulty.”

If provided with a humanitarian entry visa, it would be easier for Syrians to join family members in other parts of the world. It would also reduce the risk of them falling victim to traffickers.

“Countries bordering Syria need help shouldering the burden of so many refugees,” says Liebsch. “They need increased financial help from the international community to enable them to look after the needs of the refugees, but they also need other countries to take a share of the refugees who are fleeing the war in Syria.”

Caritas says that the integration of refugees in host countries is essential to their well-being. To enable this, workers need access to work permits and children need to be able to go to school.

Caritas has been helping Syrians in Syria, Jordan, Lebanon and Turkey by providing food and many other essential items such as mattresses and bedding, sanitation, healthcare, psychological and moral support.

UNHCR says that it has only received a quarter of the funding for its US$4 billion Syrian refugee programme.

As the conflict draws on into its fourth year, the suffering of the Syrian people grows greater. People who have stayed in the country have been trapped in embattled towns with limited access to food and medication. Those who have left find themselves living poverty-stricken in camps swollen with refugees or taking the perilous journey across the sea to Europe in the hands of traffickers.

In a message to charity workers in Syria recently, Pope Francis warned of growing indifference to people’s suffering, “But we must look back with great sorrow that the Syrian crisis has not been resolved, but only worsened, and there is risk of getting used to it: of forgetting the daily victims, the unspeakable suffering, the thousands of refugees, among them the elderly and children, who are suffering and at times dying of hunger and disease caused by the war.

“This indifference is harmful! Yet again we must repeat the name of the disease that plagues us so much in the world today: the globalization of indifference.”

For further information please contact Patrick Nicholson, head of communications at Caritas Internationalis, on +39 06 6987 9725 or by e-mail at nicholson@caritas.va.