Trafficked from Nigeria to Greece for prostitution 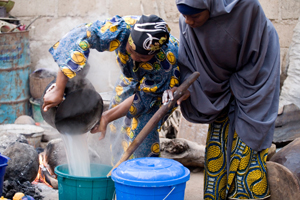 Caritas strives for better economic and social conditions at every migrant’s home country, so that emigration will not be the only option left. Here women in Nigeria benefit from a constant supply of water from rainwater catchment tank provided by CAFOD partner. Credit: CAFOD

One day, a woman came up to me as I was selling oranges in my hometown of Benin, Nigeria, and asked me what I was doing.

I told her I was earning money so I could pay the fees for my art course. I was getting around 320 dinar a day (€1.50). She said that if I went to Europe I could earn €800 a month as a hairdresser.

It was my chance to turn my life around. Life in Nigeria was really difficult. It was only when we were on the plane flying to Greece that I realised something was wrong. The woman gave me a document with a name that wasn’t mine.

When we landed in Greece, the authorities said that the document wasn’t mine because the date of birth was 1976, which would have made me 32, but I was only 20 really.

I ended up in prison for 4 months. It was hell in prison. I was locked in a room alone and nobody spoke English. I thought ‘This is the end of my life, I was so scared. I felt really depressed.’

The day I left prison, the woman was standing outside waiting for me. I said, what do you want to do now? You’ve changed my name, you’ve changed everything about me.

She said, ‘That’s life. You have to accept this gift of the name because of the documents I gave you. You’re going to work as you have to pay me back.’

She brought out a juju (an object used in witchcraft practices) and said it would kill me and my family. What could I do? I didn’t want to die.

She put me on the street and said ‘If you don’t give me €50,000 you die.’ I felt horrible. I met bad men most of the time. They beat me up, they took my money. If they were violent I told them I’d give them back their money. I didn’t want to be killed. Sometimes they’d bring out a gun and say ‘I want to have free sex with you.’ What can you do?

I worked on the street for four years getting €30 a time for sex. Any money I got, I gave to the woman, who I lived with. I also paid the rent. I gave her around €1000 a week.

I look at myself now and I’m so ashamed of what I did. I’ve been in Athens six years now. I’m not working, neither is my man. It’s difficult to feed and clothe my children. Caritas Greece helps us by giving us children’s milk and nappies and clothes.

I want to go to Finland as I have a friend who’s studying there and she says it’s OK. People are racist in Greece. They treat you like an animal if you’re black.

I don’t want to take them back to Nigeria to live because there’s no better life for them there. We’d have nothing to support them with there. I miss Nigeria, but the most important thing is my children now.

Caritas is committed to fighting the sale of children, women and men into slavery as beggars, prostitutes and forced labourers. It is part of the COATNET network which fights against human trafficking.

Members of COATNET—Christian Organisations Against Trafficking in Human Beings—work together across borders to raise awareness about trafficking and to assist victims. Learn more here: http://coatnet.caritas.org

Read message by His Eminence Cardinal Oscar Rodriguez Maradiaga, President of Caritas Internationlis, at Global Forum on Migration and Development, Stockholm, 13-16 May 2014