Caritas appeals for help on behalf of Gazans 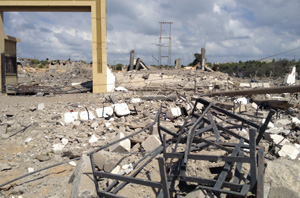 Buildings destroyed after attacks in Gaza where people are left with no running water (July 2014). Credit: Caritas Jerusalem

Caritas is launching an emergency appeal to help the people of Gaza who are suffering the effects of a two-week conflict. (Give now to the appeal)

Following attacks by Israel, over 600 Palestinians have died and over 100,000 people have fled their homes to seek shelter elsewhere. Twenty-seven Israelis have been killed in the conflict.

Fr Raed Abusahlia, director of Caritas Jerusalem said, “Most of the victims are children, women and old people. We strongly believe that the Church of Jesus Christ cannot remain silent; we cannot stand aside and do nothing.

“We decided to intervene quickly because needs of Gazans in the conflict are increasing day by day; we see that damage and destruction are everywhere in the Gaza Strip. Our urgent intervention is needed in this humanitarian crisis.

“We are also deeply concerned about the remaining small Christian community in Gaza who are also suffering like all the Palestinian people.”

The Caritas emergency programme will provide medical supplies and medicines to four hospitals plus fuel for generators. Two thousand families will receive food parcels and 500 families will be given blankets.

A second part of the programme which will be launched in three months time will provide 2000 families with cash. Three thousand families will receive hygiene kits. There will also be a focus on providing psychological support to children and general medical checks to assess the health of displaced Gazans.

The escalation of violence over the past few weeks stems from the burning to death of a Palestinian teenager by Jewish extremists. The boy was murdered in apparent revenge for the kidnap last month of three Israeli youths in Hebron who were subsequently killed.

Gaza was already in a very dramatic situation as it has been under siege for 12 years and already suffered three wars in eight years.

Gaza is considered one of the most densely populated places on earth and already suffered constant power cuts, no drinking water, a high unemployment rate before the current conflict. This war is worsening the situation of Gazans and has already exhausted the available resources.