CRS aid gets through to Gaza 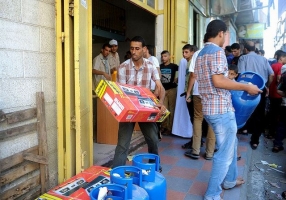 CRS aid gets through to Gaza, reaching families whose homes had been totally destroyed. Photo by Shareef Sarhan for Catholic Relief Services

The Israeli offensive in Gaza continues, with civilian casualties, destruction of buildings, damage to infrastructure and internal displacement continuing to rise.

On Saturday, 26 July a humanitarian ceasefire was respected by both sides, allowing Palestinians to buy food and water, assess damage to their homes, recover bodies and bury the dead.

Caritas member organisation Catholic Relief Services has been working with the confederation and Caritas Jerusalem in responding to the crisis.

During the ceasefire, CRS began distributing aid to families whose homes had been totally destroyed. The distribution continued on 27 July, with a total of 294 households receiving packages containing hygiene kits, kitchen sets, a gas-powered stove, water storage containers and a solar lantern.

CRS will also support fuel and medical supplies to al Ahli Hospital and Caritas Jerusalem’s network of clinics in Gaza, as well as asset-recovery vouchers to affected households.

Matthew McGarry, Catholic Relief Services representative for Jerusalem, Gaza and the West Bank, told Vatican Radio his team hopes to be able to meet the basic needs of at least 250 families by the end of the day, which translates roughly into 1,300 people.

“The situation in Gaza is really quite horrible. There are entire neighborhoods that have been basically destroyed. There are well over 100,000, I think close to 150,000 individuals who have been displaced and those are just the ones that we know of,” he said. “There are many others who are taking shelter either out in the open, or with relatives or in damaged buildings.

“There has been a huge loss of civilian lives. One of our staff had several of her relatives killed. One of our young women in our job training programming, trying to make a better life for herself, was killed in her home. It has been terribly traumatic.”

Distributions will continue as soon as safety allows, with an additional 2,706 households scheduled to receive aid in the coming weeks.