Caritas Jerusalem has condemned the current escalation of violence in Gaza and called for an end to the bloodshed.

Over 90 Gazans have been killed following four days of Israeli airstrikes on Gaza. Militants have also been firing hundreds of rockets from Gaza into Israel. UN Secretary General Ban Ki-moon has said the situation ‘is on a knife-edge’.

Fr Raed Abusahlia, director of Caritas Jerusalem, said, “We acknowledge the right of Israel to live in peace and Israelis to live in security because they are living in a continuous fear, but we don’t believe that this will come by war and aggression against innocent people, the shortest way to peace and security is justice and resolution of this conflict by giving the Palestinian population their freedom in their land and by opening Gaza to the world.”

Caritas Jerusalem and Catholic Relief Services (CRS – a US member of Caritas) have temporarily closed their offices in Gaza. CRS’s international staff have been moved to Jerusalem.

Hospitals are operating but supplies are short and power outages are frequent. Fuel is also in short supply. 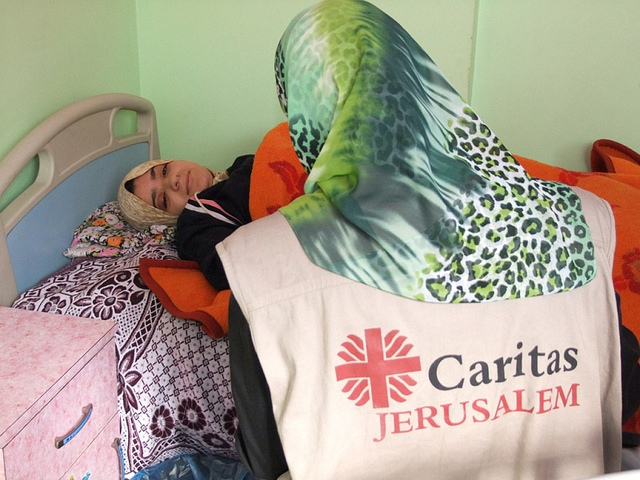 Caritas Jerusalem’s work in Gaza over the past few years has included the operation of a mobile clinic and health centre plus other health-related activities including psychosocial counselling for children with prosthetic limbs and their mothers, as well as the treatment of chronic diseases.

Caritas Jerusalem is monitoring the situation in Gaza and and is in contact with emergency teams. It says an emergency response will only be possible once major hostilities have ceased.

“Gaza is already in a very dramatic situation since it has been under siege for 12 years and suffered three wars in eight years with constant power cuts, no drinking water and a high unemployment rate,” says Fr Raed.

“Gazans have paid a very heavy price already…We all have the urgent duty to save their lives especially civilians, women and children who are dying every day.”

It seems likely that the bombardment could be followed up by an Israeli ground offensive.

The escalation of violence stems from the burning to death of a Palestinian teenager by Jewish extremists. The boy was murdered in apparent revenge for the kidnap last month of three Israeli youths in Hebron who were subsequently killed.