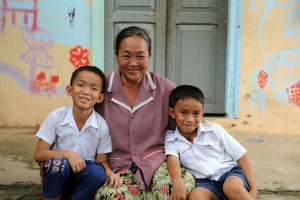 In remote rural clinics in poor countries, harried local health care workers strive to take care of hundreds of patients with little medicine or help. Having easy, low-cost ways to diagnose and treat diseases like HIV can be the difference between life and death.

Professor Suzanne Crowe, AM, of Burnet Institute in Australia shared research on a new low-cost/low-technology diagnostic instrument capable of measuring the number of CD-4 cells (white blood cells that coordinate the body’s immune response against various infections) at the level of local health facilities. Such a tool can use a drop of blood, would be disposable, yield a visible result (thus avoiding confusing results), would run on batteries and could be connected to a smart phone application to report results.

This technology would allow for more immediate analysis of immune system health in people living with HIV, so that doctors could prescribe anti-retroviral treatment in a more timely manner.

All four of the speakers started their work in the early days of the epidemic and have continued their strong commitment to find ways to prevent the further spread of the virus. The scientists either work in, or are closely linked to, Catholic health care institutions. They remarked on the courage, professionalism and non-judgmental compassion that is evident in such faith-motivated programmes.

Dr. Julio Montaner of the University of British Columbia spoke about Highly Active Antiretroviral Therapy (HAART), which works by stopping HIV replication to the point of reaching undetectable rates of HIV in plasma and sexual fluids. This causes a sharp reduction in HIV transmission. Dr. Montaner shared evidence of a correlation between increasing numbers of patients being administered HAART and decreasing numbers of new AIDS cases diagnosed in British Columbia between 1983 and 2013.

Dr. David Cooper of Australia directs a clinical research and trials collaboration with the Red Cross of Thailand. He is actively involved in studies of biomedical prevention and optimizing treatment for HIV in the developing world. He recalled the early days of AIDS in Sydney, when the Sisters of Charity at St. Vincent’s Hospital, located in neighborhoods where there were large numbers of homosexual men and injecting drug users, treated all in need of HIV care.

Dr. Stefano Vella of Italy recalled the famous Durban International AIDS Conference, when people living with HIV in the developing world demanded access to HAART. This access previously had been limited to people in high-income countries who could afford the medication prices of up to $30,000 US dollars per patient per year. Those demands led to pressure on pharmaceutical companies to lower prices, and on governments to find new financing mechanisms that would allow access in the developing world.

The advocacy and partnership between scientific, clinical, and activist communities, said Dr. Vella, had helped develop a whole new approach to HIV/AIDS care that could be a model for solving other major public health challenges.