People first when planning the way forward for HIV and AIDS 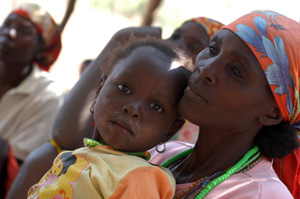 Mother and daughter, residents of the Caipumba community in Angola listen to a Caritas-supported seminar on HIV/AIDS. Credit: CRS

In its 2014 “Gap Report”, UNAIDS highlighted how to “close the gap between the people moving forward and the people being left behind” regarding HIV and AIDS, and provided ambitious recommendations on the way forward.

In his foreword to the report, Michel Sidibé, Executive Director of UNAIDS, boldly stated that “working together, ending the AIDS epidemic is possible, and it will take leaving no one behind”. Sidibé emphasized the importance of putting people first in the fight against AIDS, and reported “we have seen HIV infections drop by 38% since 2001, there were [still] 2.1 million people newly infected in 2013. There are also 22 million people not accessing life-saving treatment”.

The UNAIDS Gap Report noted the tremendous strides that have been taken in the fight against HIV/AIDS. Across the world new infections are declining, more people living with HIV know their status and are receiving anti-retroviral treatment (ART), AIDS-related deaths are declining, and very importantly, we are one step closer to eliminating new HIV infections among children.

Providing antiretroviral therapy (ART) access to mothers across the globe has averted “more than 900,000 new HIV infections among children since 2009”. Ensuring that mothers are provided access to ART has allowed us to lower the HIV infection rates in the younger generations and lessen the impact of the infection.

Although the future of the AIDS epidemic is showing hopeful signs of progress, the UNAIDS Gap Report also included the alarming information that, while the number of mothers receiving ART has increased, 76% of children now living with HIV do not have access to these life-saving medicines. Without such treatment, one-third of such children die before their first birthday and one half die before their second birthday. This has been a major concern of Caritas Internationalis, which has been campaigning for the early diagnosis and treatment of mothers and infants through its “HAART for Children” Initiative.

The UNAIDS Gap Report also shows that many people living with HIV/AIDS who are often left behind are denied access to healthcare, employment, education, and social protection due to stigma and discrimination, and lack of available, accessible and community-based services.

During the Catholic pre-Conference on HIV and AIDS, Ambassador Deborah Birx, Global AIDS Coordinator for the USA Government, noted that “Faith-based organizations have been there from the beginning (of the HIV epidemic) even when we did not know how to treat or what to treat…You have been the voice of the most vulnerable and the outreach hand to the most marginalized communities.” During the same session, UNAIDS Deputy Director, Dr. Luiz Loures, reported that faith-based organizations, and in particular, Catholic Church-related organizations, provide 40 percent or more of ART services in such countries as Democratic Republic of Congo, Ghana, Kenya, Lesotho, Malawi, Nigeria, Sierra Leone, Tanzania, Uganda and Zambia.