Gaza: ‘The scars will last a lifetime’ 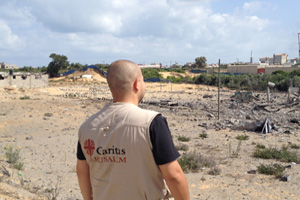 On Tuesday I had a really tough day at work. I went to the Shojae’ya neighbourhood in Gaza.
So many people have left their homes in this and other neighbourhoods, taking absolutely nothing with them.

Shojae’ya has been heavily bombed and there are whole families living in churches. It was difficult to concentrate on what I was doing while I was there because of the pounding of the bombs. Part of my job for Caritas is to travel to various parts of Gaza and assess what people need. Working in Gaza during the conflict is like working in a major disaster area. People are left without food and water and often they have to flee their homes with nothing but the clothes on their backs.

The bombing stopped for an hour early this morning so people could go out and so ambulances
could look for the dead and injured. It was a chance for residents to lie down and rest. People haven’t been getting much sleep in Gaza. Apart from that brief lull, it’s been like a world war. The bombings have been non-stop. In the late morning, I went to Shifa hospital, the biggest of the four public hospitals in Gaza. Caritas has a long-standing working relationship with the hospital and is supporting its emergency programme by providing fuel for its generators and essential medical supplies, which it has done since the war of 2012.

I saw many injured people at the hospital. Their faces were full of fear and sadness. It is hard to describe the desolation that people feel in Gaza. I also visited the Holy Family school. Seven hundred people are living there, having fled their homes. I have been coordinating with our headquarters in Jerusalem to provide them with hot meals for at least a week. Then I went to the Greek Orthodox
church, which is hosting 1,100 people. They urgently need mattresses and blankets.

Fr George Hernández is a Roman Catholic priest living in Gaza. I went to see how we could help him and Mother Teresa’s Missionaries of Charity. Together they take care of 28 elderly and disabled people in their house. After we had had a chat, Fr George joined with me in visiting families in need.

I’ve been living in the Gaza Strip for 13 years and I’ve been working for Caritas since 2009. Many of the buildings in front of my house have been bombed. I’ve got two children, aged two and six, and they cry a lot because of the bombings. In spite of what is happening now, I hope that the time will come
when they will be able to have a life where there’s peace and love rather than wars and
violence.

Caritas offers psychological support to help children come to terms with the recurrent conflicts, but I often wonder how all this violence will affect them as they grow up. I remember Caritas mobile medical teams talking about the effects of the 2009 conflict on children in Gaza. They were seeing traumatised children of all ages with eating disorders, insomnia, chronic fear and bed-wetting. In
fact, to this day, most families in Gaza are still suffering from the effects of the previous
wars in 2009 and 2012. Talk to most people and they’ll tell you about the loss of a loved
one, injuries, the destruction of their houses and land and mental illness.

Recently I met a young boy called Muhammad. He’d lost his home in a bombing raid. I asked him if there were any games he would like. He told me that he’d like a tank, a military aircraft and a policeman who could make sure he got back his home. Muhammad is six years old and all he sees in his world is
war and destruction. For Gaza’s children, fear and insecurity are scars that will stay
with them for a lifetime. We need to take care of the most vulnerable people. An integral
part of what we do as Caritas is comforting people in their time of need.

Caritas launched an emergency appeal this week for over €1.1 million (£870,000). We
will provide medical supplies and medicines to four hospitals plus fuel for generators.
We’ll give blankets and food to thousands of families. There will also be hygiene kits and
financial support for families.

But despite the fear that hangs in the streets here, I’m not afraid to be working in Gaza.
I sometimes worry but I’m not afraid because as Caritas, we offer our service through love
and I always feel that Christ gives me strength.