As part of a wider dialogue on Caritas’ work on child migrants, Theodora Lam, a research associate from the National University of Singapore, contributed the following based on her involvement with Child Health and Migrant Parents in South-East Asia (CHAMPSEA) – a study looking at the health and well-being of South-East Asian children left behind by migrant parents. 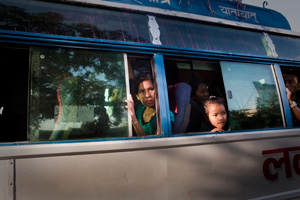 The prevalence of female migration, though not unique to South-East Asia, has led to some reports on a potential “crisis of care”. Credit: Orlinsky/Caritas

As South-East Asians increasingly migrate overseas in search of work, there is concern over the growing number of family members, particularly children, left behind in the home countries. The prevalence of female migration, though not unique to South-East Asia, has led to some reports on a potential “crisis of care”.

With this in mind, the CHAMPSEA project set out to investigate the impact of parental migration on the health and well-being of children in Indonesia, the Philippines, Thailand and Vietnam. The study, which focused on children aged 3 to 5 years and 9 to 11 years, looked at psychological, physical and general well-being, education outcomes and other issues.

The four countries were selected given the increasing number of women leaving them to find work abroad, as well as the common practice for workers to move on short-term, albeit consecutive, contracts with the limited possibility of bringing along their families.

In 2008, CHAMPSEA interviewed around 1,000 migrant and non-migrant households in each country, focusing on provinces with higher-than-average international out-migration rates. Each household had an index child from one of the two age groups. Questionnaires targeted the household’s responsible adult, children from the specific age groups and the index child’s main caregiver. CHAMPSEA also measured the height and weight of children in each household and conducted follow-up interviews with selected caregivers and older children in 2009.

Results from the CHAMPSEA study, though notably mixed, did not reveal a major “crisis of care” when mothers worked overseas or that children of migrants were more severely advantaged or disadvantaged compared with children of non-migrant parents. Still, the diverse findings should be carefully read in relation to the study’s methodology and the respective country’s context. The study did find that the health and well-being of children left behind in the four countries were affected, to varying degrees, by factors such as the gender of the migrant or caregiver, the caregivers’ own mental health, contact with migrants and even a mother’s previous migration history.

Governments, civil society and the Church can play an important role in developing support mechanisms that minimize negative impacts on both migrants and their family members, especially children and the elderly.

While it is important to take into consideration specific migration histories and country backgrounds, below are some recommendations and best practices – in both destination and origin countries – that can help address some of the more common problems.

Recognising the rights of migrants and their families

All countries, both receiving and sending migrants, should be encouraged to reference and ratify approaches such as the United Nation’s 1990 International Convention on the Protection of the Rights of All Migrant Workers and Members of their Families (ICRMW). The ICRMW, despite its flaws, is still the only international legal framework that protects the basic rights of migrants and their families.

Medical benefits, counselling services and other interventions targeting children, caregivers and the elderly can be set up and supported by the state, civil society or the Church. Likewise, pre-departure briefings for migrants and their families can help prepare them for the separation and reinforce the importance of maintaining communication over time and distance.

Good examples
ATIKHA, Inc. (Atikha Overseas Workers and Communities Initiatives), a non-governmental organisation established in the Philippines in 1995, addresses the social costs of migration by supporting families of migrant workers through various activities such as providing psychological counselling via school visits; carrying out consultations with school guidance counsellors and making referrals to social work and community development agencies; and partnering with local schools to raise children’s awareness of their parents’ life and work conditions abroad. The organisation also helps migrant families identify viable enterprises through feasibility and market studies.

Reliable and affordable communication between migrants and their families is crucial for maintaining relationships and the well-being of both parties. Governments should continue to invest and improve their telecommunication infrastructure, especially in more remote areas. Employers need to be encouraged to provide migrants in confined situations with unrestricted access to communication tools.

Academics at the Asian MetaCentre for Population and Sustainable Development Analysis (based at the Asia Research Institute of the National University of Singapore) and the University of St. Andrews carried out the study between 2008 and 2009, with funding from Wellcome Trust, UK (GR079946/B/06/Z; GR079946/Z/06/Z).

Please write to CI’s Advocacy Department (suelzu@caritas.va) for more details on contacting the CHAMPSEA research team if you have further questions about the CHAMPSEA study.