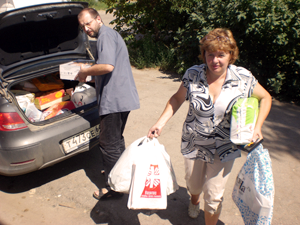 Dioceses in Russia are collecting food, clothes and more for people who fled their homes in eastern Ukraine and are now living in Russia. Photo by Caritas South of Russia

In western Russia, diocesan Caritas members are helping mothers and children who have fled Ukraine. Caritas South of Russia (Diocese of Saratov) is now appealing for €90,000 to respond to the influx of refugees.

Thousands of people escaped fighting in the Ukrainian regions of Donetsk and Lugansk and have found shelter in the Rostov region of Russia. Caritas will give families food parcels (including special nutrition packs for children), hygiene materials and bedding.

Earlier this summer, the Caritas Diocese of St. Clement in Rostov-na-Donu gave medicine to refugees in a tent camp in the Rostov region. These drugs were sent by Caritas Sochi.

Vadim Naboichenko, the coordinator of emergency projects of Caritas Diocese of St. Clement, visited the refugees in the Rostov region. Many are formally seeking asylum in Russia.

“I was able to speak with one woman from Donetsk who arrived with her daughter,” said Naboychenko. “Her husband stayed to guard the house. She hopes to go back, though she’s not sure it will happen. She was clearly greatly shocked.”

In Saratov, Russia, Caritas is helping women and children who fled the conflict. The mothers are worried about clothes for the coming autumn, food for the children, their legal status in Russia, jobs, housing and schools for their children.

Few of them believe that they will be able to return home in the near future. The local Caritas is asking the community for cribs and for children’s items like warm clothes, books, toys and school supplies.

Caritas Volgograd is also collecting supplies such as laundry detergent and children’s underwear for women and their children. In Volgograd, Caritas helped an Orthodox Christian family centre collect items like diapers.

“Whether in Ukraine or in Russia, Caritas is present to serve the victims,” said Jorge Nuño Mayer, Secretary General of Caritas Europa, which launched the appeal for Caritas South Russia. “We hope for a rapid end to the conflict and long-lasting peacebuilding among the people.”