Darfur: A day in the life

Zalingei in Darfur’s central region has three sprawling camps that have become home to an estimated 150,000 people made homeless because of the ongoing conflict in the region.

For the last ten years Caritas’s partner Norwegian Church Aid(NCA) have been at the forefront of running life-line services for camp residents.

The three camps are a short distances away from each other by car, so if necessary NCA staff are able to visit all three in a day.

Babiker, an NCA aid worker, who comes from the area, and knows every inch of all three camps very well, takes us through a typical day’s work

This is the smallest of the three camps, hosting around 20,000 people. The snaking line of Jerry cans are already in place at one of the camp’s fifteen water standpipe stations, but no water as yet. Babiker is responsible for water and sanitation, and inspects the solar panels that pump the water to the standpipes. He explains that the sun needs to be higher for the solar panels to generate the energy needed to pump the water. The water should be ready in an hour’s time. 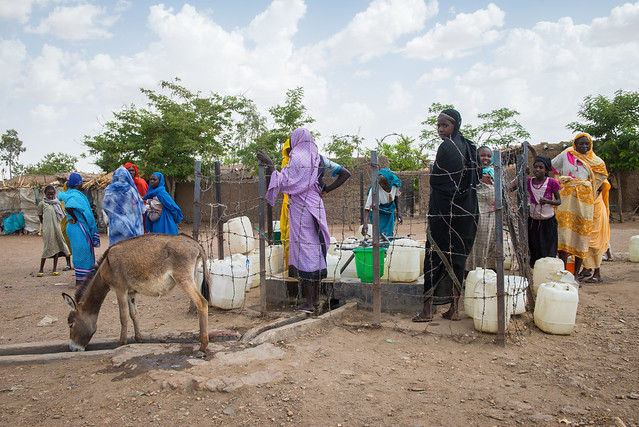 It’s clear that the well and the solar panels have pride of place in the camp. They are fenced off for protection and safety. Babiker explains that one solar panel can be a lucrative mobile phone charging business, so the camp community volunteers, who NCA supports with training – for example how to put the right amount of chlorine in the water, and with repairs, fiercely guard these precious camp assets.

09:30 -The Sheiks are the camps community leaders, Babiker pays his respects and listens to their concerns. These impromptu meetings allow him to find out quickly any problems or urgent needs. Security is always top of the agenda as is work for young people who have nothing to do in the camps. The Sheiks worry that ‘idle hands’ will lead them astray. There’s also talk of vulnerable families – one of the Sheiks expresses his concern for a woman in his area whose husband has recently died.

Babiker explains that NCA believe strongly in community participation so they work closely with the Sheiks and have organised meetings with them as well as frequent impromptu meetings such as this.

10:15 – A Ministry of Health official is visiting the clinic to see how things are going. The clinic is still busy, but the main ‘rush hour’ is nearly over.

A new supply of vaccinations arrives in a special grey box. The clinician quickly takes the box into his small room, fills out the paper work, and checks his vaccinations and calls up the first woman in the queue, who has prepared her baby’s arm for the needle prick. There’s silence and then a loud wail from the baby.

NCA with the Ministry of health have supported the training of staff in the clinic, and to date Babiker says that the system has worked well. The clinic is well used, and that women understand the importance of bringing their children to be vaccinated against childhood diseases. 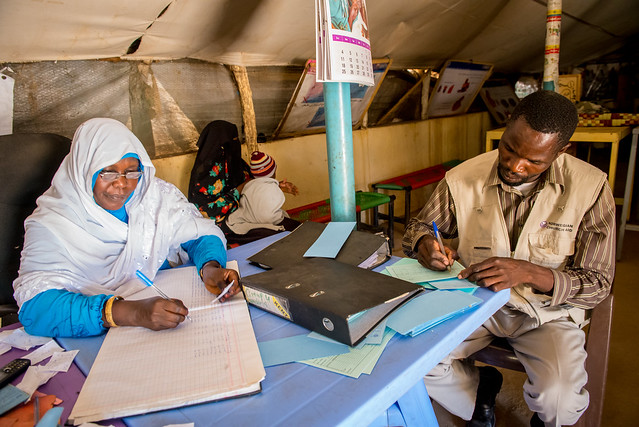 11.00 – Fatoul – This is breakfast time, most people don’t eat until 11.00am. The sun is now high in the sky, and it makes sense to sit down in the shade and take a short break.

12pm– We stay in Hassa Hissa Camp as there is a hygiene promotion event, a project supported by NCA . The two engaging community hygiene trainers really ram home the message of hand washing as the single most important thing to do. Babiker adds, that ash is also good to use, if there is no soap. He goes on to explain that these women will now go back into their areas and train their neighbours and friends as well as their children.

Soap is handed out to the women by way of a ‘certificate’ for completing the course, and a reminder of good hygiene practices.

13:30 We head for an area just outside of Hamadia camp where camp residents have small plots of land to grow food. Solar panels pump water to irrigate the land, but when they don’t produce enough energy, then a generator is fired up. Babiker explains that purchasing large amounts of diesel to run a generator requires paper work, which can be bureaucratic and slow at times. The paper work finally approved, the diesel arrives and NCA community volunteers who take care of the pumping station off load the drums. 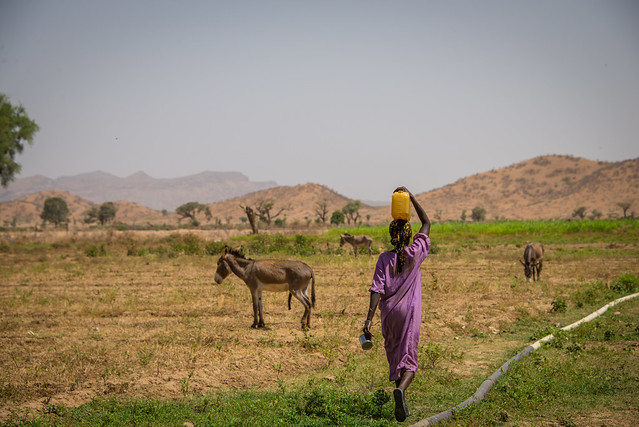 14:30 News has come in that there are more new arrivals that have come in on the outskirts of Hamadia camp, joining the already 300 or so people who have been forced from their villages and homes because of the ongoing conflict inthe region.

This desolate, barren, wind-swept sandy landscape is no place for people to live, yet on arrival there is no choice. Seeing one family that had arrived with all their belongings piled up on a battered old vehicle is forceful reminder of how the conflict deeply affects the lives of ordinary people.

As part of the Emergency Preparedness Unit, Babiker sees that the first priority for this area is to get latrines built.

15:00 –Prayers Babiker along with others, answers the call to prayer, and finds a quiet space to pray.

15:15 – 16:00 Back to the office to write up the daily reports and discuss with other teams some of key issues from the day. The new arrivals being the current priority for the team.