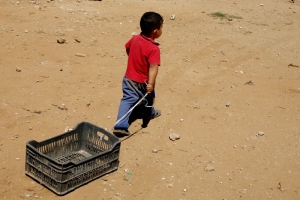 A Syrian boy plays with a plastic crate near a refugee camp in Lebanon. Credit Matthieu Alexandre for Caritas Internationalis.

As the number of disasters all over the world rises, the lack of funds for humanitarian aid is exacerbating an already serious situation. Millions of people in Syria, Gaza, South Sudan and other conflict regions are waiting for help.

The United Nations, the Red Cross and Médecins Sans Frontières are sounding the alarm about the lack of resources. Cordaid (Caritas Netherlands) and its international emergency aid network, Caritas, are doing what they can but they are also short of resources.

Humanitarian funds are drying up when the need for aid has never been greater. In this “summer of disasters”, Cordaid are calling on the Dutch government to make more funds available.

In addition to the crises in Syria, Gaza and Iraq and the Ebola epidemic, there are the now almost forgotten civil wars in the Central African Republic and South Sudan. Each of these disasters cries out for attention. We should now be moving full steam ahead to save lives. But we can’t.

Cordaid offers aid in nearly all these conflict and disaster areas, either directly or through Caritas, our international network of Catholic emergency aid organisations. But a lack of resources means that we are no longer able to jump in.

“We do what we can,” said Paul Borsboom, emergency aid coordinator at Cordaid. “Like in Gaza, for example, where with €200,000 Cordaid contributes a large contribution to Caritas aid efforts. But it’s not enough.

“We have only €500,000 left for acute emergency aid until the end of the year, which amounts to a fifth of our annual budget for acute emergency aid. Given how expensive aid packages are and the operational costs of helping tens of thousands of refugees in countries like South Sudan or Syria, you just know that we are quickly running out of budget.” 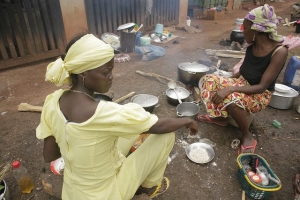 The seriousness of the situation is reflected by a decision Cordaid was recently forced to take to divert emergency aid funds earmarked for the Central African Republic to other crises.

“Take South Sudan,” he said. “This is a country for which we have been raising money globally since February. But the response has been very disappointing. The same can be said for the Central African Republic and, to a lesser extent, for countries that are helping Syrian refugees, such as Jordan, Lebanon and Turkey.

“We are also receiving less resources to provide aid in Mali, Niger and other conflict countries in Africa. We are also active in the ‘forgotten’ disasters that the media have lost interest in, such as in Myanmar and the drought in the Sahel. In these regions too, the resources available to us are insufficient to cover what we’d like to do.

“One of the main reasons for this is that our own Caritas members, such as Cordaid and the 164 Caritas organisations all over the world, aren’t able themselves to raise enough funds. They receive less support from their respective governments. Drastic government cuts made these past few years in development and emergency aid are now causing a great deal of pain.”

The Dutch Minister of Foreign Trade and Development Cooperation, Lilianne Ploumen, has sounded the alarm herself. She indicated that the bottom of the barrel of the Dutch discretionary budget was now in sight. We won’t know till the 16 September, when the government presents its budget, whether the economic growth will allow the allocation of additional funds for acute emergency aid. 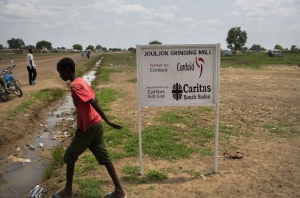 Aside from the emergency aid budget, Paul Borsboom has reservations about how aid and trade have been dominating Minister Ploumen’s agenda.

“In conflict countries like Syria, the Central African Republic and South Sudan it will take more than the stimulation of trade between local and Dutch companies to help the millions of victims and refugees,” he said. “These people will only be helped by acute humanitarian aid and the reconstruction of their communities. That’s what people in conflict areas now need the most.”

Then there’s the question of how this money will be spent: the so-called “choice of channel”. Will it go to large multilateral organisations like the United Nations, or to aid agencies?

“It won’t surprise you to hear that my preference is that as much of it as possible should go to aid agencies like Cordaid,” said Paul Borsboom. “The money will then be spent more efficiently, with lower overheads and more transparency, because we can show what happens to every euro that’s spent on emergency aid.”