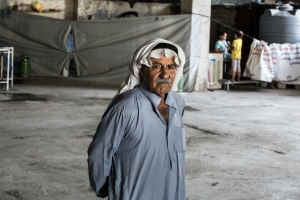 An internally displaced Christian man in the construction site in Erbil, Iraq where he has found shelter. Caritas has been supporting Christian and Yazidi families forced to flee. Photo by Daniel Etter for Catholic Relief Services

Every minute, four children inside Syria are forced to flee their homes.  Extremists in Iraq and eastern Syria are carrying out widespread ethnic and religious cleansing in the large areas under their control.  Large tracks of the best lands are being confiscated by the Israel in the Occupied Palestinian Territories.

We are confronted with the greatest crisis the world has faced since the Second World War.

And in a terrible echo of that war, in Mosul in Iraq, the Arabic letter for “n,” the first letter in the word “Nazarene”, was painted on doors to identify the homes of Christians who were then beaten or executed.

How do we confront such evil?

The West seeks to build a military alliance and send more bomber planes and drones to Syria and Iraq.

But further violence is never the answer. It will just lead to more ‘senseless slaughter’ in the words of Pope Benedict XV, describing the 1914-1918 Great War. As we mark the centenary of that conflict, we also recall that Pope Benedict XV said at the time: “Force can repress the body, but it cannot repress the souls of men”.

Pope Francis said last week, “War is never a necessity, nor is it inevitable. Another way can always be found: the way of dialogue, encounter and the sincere search for truth.” Then in a message to Arabic speaking pilgrims at the General Audience last Wednesday, Pope Francis said, “The Church faces hatred with love, defeats violence with forgiveness; responds to weapons with prayer.”

When Caritas Internationalis held its Representative Council meeting in Amman, Jordan in May, we had the opportunity to speak with Syrian and Iraqi refugees. I was struck both with their desire to go back home or to a third country and a great appreciation for the work of Caritas.

Caritas organisations have reached almost one million people caught in crises in Syria, Gaza and Iraq with food, healthcare, education, shelter, protection and counselling. But resources are shrinking while needs grow.

Less than half of $7.7 billion worth of humanitarian appeals by the international community for the Syria crisis alone have been met. Lebanon, Jordan and Turkey and other neighboring countries cannot be left to deal with the Syria and Iraq crises alone.

We must urge governments to do more to support aid programmes. And that also means other countries accept their fair share of refugees.

But that is not sufficient, humanitarian aid cannot solve the problems. We must engage with advocacy for peace. Conflicts in the Middle East are being fuelled by the guns, bombs and bullets that continue to flow into the region. Countries, including those on the UN Security Council, are providing arms and ammunition and entertaining the wars and their consequences. 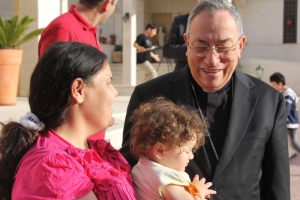 Many of those shrinking from their responsibilities to provide humanitarian aid are among those providing the greatest number of arms. It seems there is not enough money for both, and political agendas come first before people. Governments must agree to a total cessation of arms transfers to the Middle East countries engulfed by conflict.

The Israeli blockade of Gaza must end to allow Gazans to protect their lives and livelihoods and so they can live a dignified life.  The whole question of Palestine must at last be solved in justice. Israeli occupation must come to an end, and a manageable state of Palestine be recognised by Israel and the international community on the officially recognized borders of 1967.

His Beatitude Patriarch Louis Raphael Sako, President of the Catholic Bishops Assembly in Iraq, speaks of the ‘extinction’ of Christians and Yezidis from lands they have lived in for millennia.

The exodus of Christians from the Middle East and the collapse of pluralist societies is a great concern. It has huge consequences for the communities themselves, for their societies and for the whole world itself.

Peace in the Middle East must be based on justice for all peoples. It must not be imposed from outside, but achieved from within. We need inclusive regional talks.

“Peacemaking calls for courage, much more so than warfare,” said Pope Francis to his guests – the Israeli and Palestinian Presidents Shimon Peres and Mahmoud Abbas – as he welcomed them to his home in June for an Invocation for Peace in the Holy Land.

Join me in praying for courage for our polictical leaders and a just and lasting peace in the Middle East.

Listen to Cardinal Rodriguez Maradiaga address a Caritas meeting on the Middle East.