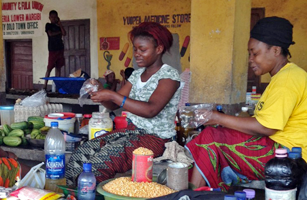 A vegetable market in Liberia. As Ebola spreads through West Africa, markets are sometimes closed and travel is restricted. Photo courtesy of Timothy Flanigan, M.D.

When Augustine Tamba Fallah was considering whether to drive to Kenema, one of the hottest Ebola hot zones in Sierra Leone, his family members told him not to go. “They were afraid,” says the Caritas Freetown case worker. But Fallah decided to make the trip.

He wasn’t delivering an experimental serum or high-tech equipment to fight Ebola. He was simply delivering food.

As Ebola spreads through West Africa, even healthy people are suffering from the disease’s economic fallout. Markets are sometimes closed and travel is restricted. Whole families in quarantine cannot go to the field to farm. Trucks, including those carrying food, may not be allowed beyond certain areas.

“The lockdown means people cannot go out to do anything,” says Ishmeal Charles, also of Caritas Freetown. “If a woman sells potatoes, she has to go to her garden in morning, then go to market and sell them. Then she has money to buy food for the day.”

“Now everything is at a standstill. People are getting poorer every day,” says Charles.

The crisis has led to more unemployment in both urban and rural areas. In Freetown, “people have been laid off—staff in hotels and guesthouses,” says Fallah. “Offices have closed down.”

Cut off from the world, families in the Kenema epicenter are suffering from more than fear of Ebola. “The town is closed, except for people like me with the food,” says Fallah. “They’ve quarantined so many houses and no one comes in or out, but I had a pass.”

“People are coming round the bishop’s house looking for assistance. Their father or mother has died, there is no breadwinner in the family,” says Patrick Jamiru of Caritas Kenema.

Even when the family breadwinner is healthy, restrictions on movement have a ripple effect that hurts children. “At home, often it is either the father or mother who takes care of all the problems of the family,” says Alexandre Kolie of Caritas Guinea. “If that person has problems, the whole family will have trouble with food, health, clothing, education and more.” Food prices have gone up, so even people who aren’t in quarantine or in blockaded areas may have trouble affording it.

For those in mandatory 21-day quarantine because of suspected contact with an Ebola patient, the food situation is even worse. “There are houses in Kenema and even in Freetown that are quarantined. They don’t give them food for days,” says Fallah. “There are security guards around the houses. If anyone escapes, if they are caught, it’s a big problem.”

Closed borders don’t just affect local markets and deliveries, but also the shipment of food by boat and over land from other countries. “Here in Liberia, the staple food is rice,” says Napoleon Cooper, head of Caritas Liberia. “In the general population, there’s a fear that there will be a shortage of food.”

People who are lucky enough to survive the virus may have to restock their households. “Some Ebola patients survived and were discharged,” says Jamiru. “But the things they were using in their house–their beds and other things—cannot be used again. The medical teams burn it totally.”

Through its church networks, Caritas has been doing Ebola prevention work in West Africa for months. Dioceses are also giving families food as best they can. In Guinea, Caritas plans to distribute food to people during their weeks of quarantine.

Now Caritas is working on ways to help families who were already living a precarious existence, and whose livelihoods have been dealt a blow. “These are some of the poorest countries in the world,” says Moira Monacelli of Caritas Italiana. “For the economy, the Ebola crisis is a very big problem. We also need to think of mid-term and long-term help.”

Meanwhile, Caritas is working to meet the most immediate needs while being careful not to jeopardize staff. When Augustine dropped off the food in Kenema, he didn’t sleep there.

“Before I went, I said, ‘I want to go and help,’” he remembers, echoing what many aid workers are saying about the communities they serve. “It’s a risky job, but people are dying, they are suffering. The first thing we have in mind is our feeling for each other, a humanitarian feeling. Our second feeling is, be very careful.”

When he arrived, “People were so happy they were dancing, they were singing,” he says. “But I didn’t allow any of them to touch me. I said, ‘I’m sorry.’

Resources from the meeting are available here.