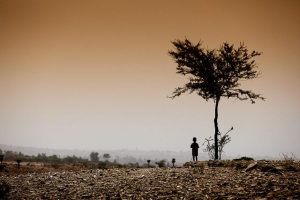 Credit: In one of the world’s poorest countries, economists predict that climate change could cut development by 10 percent by 2050 without adaptation investment. Isabel Corthier/Caritas Belgium

A changing climate disproportionally hurts the poor and world leaders must address it, said Cardinal Oscar Rodríguez Maradiaga. The Caritas Internationalis president will join leaders of many faiths next week in New York to raise the issue of the impact of climate change on development.

The Interfaith Summit on Climate Change will take place on 21-22 September 2014. The faith meeting immediately precedes a UN summit on climate change for heads of governments.

“A changing climate hits the poorest,” said Cardinal Rodriguez. “They are the ones who contribute least to climate change and are least equipped to cope with it. These are hungry people whose daily bread is threatened when the weather turns on them.”

Cardinal Rodriguez and thirty other religious leaders will convey faith communities’ concerns and proposals to governments at the 2014 UN Climate Summit.

“Too much of the abundant, fertile world we were given to protect and enjoy has been corrupted,” said Cardinal Rodriguez. “We have become indifferent to the damage we are doing, both to the natural world and to our poorest brothers and sisters. We must place the poor at the heart of a new approach to creation.”

“When every day is a battle for survival, climate change multiplies existing inequalities and makes it harder for poor families to climb out of poverty,” said Cardinal Rodriguez.

“Creation is a gift from God, but our use of creation—especially our use of fossil fuels – has had a significant impact on the natural world,” said Joseph Cornelius Donnelly, Caritas Internationalis delegate to the United Nations in New York. “Lands, forests, deserts and seas are changing. Whether through bad harvests, arid land, acidic oceans or more extreme and unpredictable weather, the changing climate is hurting the poor.”

Caritas says industrial-scale agricultural practices has transformed landscapes, disrupted ecosystems and threatened species. “Development which adversely affects the environment excludes and destroys,” said Donnelly. “We seek development which is inclusive and in harmony with nature.”

Sponsored by the World Council of Churches, Religions for Peace and CIDSE, the Interfaith Summit will bring the voices of the poor and the recommendations of humanitarian workers to the forefront.