Hundreds of villages flooded in Pakistan 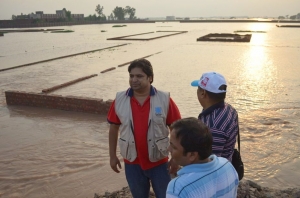 The heaviest rains in 50 years have triggered flash floods in Azad Jammu and Kashmir and Punjab provinces of Pakistan. As flood chaos continues with more rain forecast, Caritas Pakistan workers are visiting different dioceses for the assessment of the ongoing emergency.

About 1300 villages have been swallowed up by flood waters along with livestock and harvest. More than 200 people have died and thousands have been stranded since heavy monsoon rains hit northern India and Pakistan, overflowing the Chenab, Jhelum and Sutlej rivers.

Assessing the flood situation is always adventurous but the risk increases when you have to do it in non-stop rain. That’s what happened when we began the four hour travel to Narowal District on 5 September under showery skies.

Only 4W drive vehicles could make it through roads turned to lakes. The pavements had completely vanished in knee deep water. The pipes under newly built bridges sprayed waterfalls on the passing traffic. I took photos of a rickshaw carrying school children stuck near a fallen tree, people wearing plastic bags and riders pulling their broken down motorcycles along. 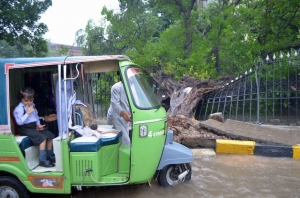 Struggling to cope with the floods in Azad Jammu and Kashmir in Pakistan. Credit: Kamran Chaudhry/Caritas Pakistan

Even the old River Ravi, which usually remains dry most of the year, was swollen. Outside the city, I could only see waves of water on farm lands.

The strong winds combined with heavy downpours also affected the shelters built by Caritas Pakistan Lahore for the flood affected in 2012.

The locals had removed their beds and other household items from the damp rooms as water crept on the newly built walls. “We’re stuck inside for five days”, a woman told me. We visited three villages – one of them with four damaged houses – and photographed several mud barns which had caved in.

Hanjli Mehtab Pur is located at the bank of Nullah Deg, through which a surge of 37,000 cubic metres per second of water gushed.

The main mosque of Hanjli Mehtab Pur has called for volunteer muezzins after four houses were damaged by stormy rains. “Seven men have agreed to lead azan marathons for protection against the harsh monsoon. Each of them will lead the prayers for seven hours”, said Sharakat Ali, head of the Disaster Management Committee (DMC) of Hanjli Mehtab Pur, to our Caritas Pakistan team during a meeting. 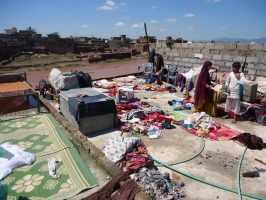 While everybody in Caritas meeting arrived dripping in wet clothes, Ali met the staff in yellow rain coat which he received along with other safety equipment. The DMC consisting of 8 members has inspired 16 volunteers since it was formed in 2012 and the awareness sessions provided by Caritas Pakistan Lahore are now practically helping them.

“We gathered the second day after the floods were announced. We have guided other villagers to safe places and evacuation routes. Also speakers have gone to mosques for announcing further alerts,” he said.

“The livestock barns have caved in and people are worried about protecting their source of milk and money. Fever is rampant amid unending downpour but we are treating the villagers with medical kits provided by Caritas”.

Our journey back home began in darkness and with thundershowers lashing our vehicle. The driver could not exceed the speed of 20 km/h because whenever he tried, mud splashed almost 8 feet, blurring the screen. 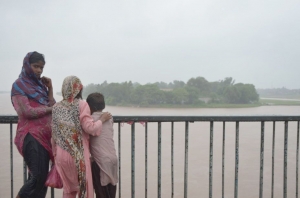 There was nothing else we could do except get busy in discussions and hope to get back home soon. The rain finally turned into mild drizzle at 9 pm when we neared the yellow lights of Lahore toll plaza.

I hate humid summers but this journey taught me the importance of a sunny day. For all of those affected by floods in Pakistan and India, I share God’s rainbow covenant that he made with Noah: “Thus I establish My covenant with you: Never again shall all flesh be cut off by the waters of the flood; never again shall there be a flood to destroy the earth.” Genesis 9:11.

Caritas Pakistan is already providing ‘non-food’ kits to affected families in Lahore and Rawalpindi dioceses as it assesses how to respond further.