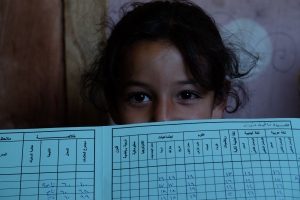 Caritas Lebanon recommends that all migrant children in Lebanon should be allowed to attend public school at no cost to their families. Copyright: Patrick Nicholson/Caritas

In 2000, Samir Saaed fled war-torn Sudan in search of a better life. After travelling through several countries, he crossed the Lebanese-Syrian border into Lebanon without a visa. He found work through the help of the Sudanese community in Lebanon, and has held various jobs over the years in Lebanon, including as concierge, gas station attendant and cleaner in a restaurant.

In 1999, Samir’s future wife Priyha travelled from Sri Lanka to Lebanon, via an agency, to become a domestic worker. She worked for her original employer for one year, but, after suffering abuse and harassment, she ran away without any documentation. Priyah met Samir in 2000 and they were married shortly after by a sheik. As neither Priyha nor Samir had a residence permit, their marriage certificate from the sheik could not be officially registered in Lebanon.

Without a marriage certificate, Samir and Priyha could only register the births of their four sons with the local mayor, not at the foreign birth registry. Samir, however, was able to obtain Sudanese passports for their children with the help of the Sudanese Embassy in Beirut.

Initially Priyha and Samir sent their two eldest sons to a private school, but after one year they had to withdraw them because the tuition fees were too expensive. They then tried to enrol their sons in public schools but were denied access, as their sons did not have residence permits.

The Caritas Lebanon Migrant Center opened Beth Aleph, a school that provides primary education to children of migrant workers. In addition to free tuition, Beth Aleph covers all transport costs and book expenses, and even provides medical insurance for the children through the school. Eventually Samir and Priyha enrolled their two eldest sons at Beth Aleph and later their two youngest sons. Although Samir is happy that his children are currently being educated, he worries about his sons’ education prospects once they graduate from the school. Private school is too expensive for the family and finding a public school that will accept undocumented children is difficult.

Healthcare is another challenge. Samir and Priyha have been able to provide basic healthcare for their sons, including vaccinations. However, they have had to pay out of their own pockets. If anyone in the family were to become seriously ill, the Saaeds would not be able to cover the medical costs.

Within Lebanon, the Saaeds must limit their movement to reduce the chances of being arrested and detained for lack of documentation. They would like to leave Lebanon but cannot because Priyah has been living there for over ten years illegally; fines in Lebanon for overstaying visas increase the longer one stays beyond the expiry date. She cannot get an exit visa without paying a heavy fine.

The following are recommendations that could help close the gap between Lebanon’s domestic laws and its international obligations with respect to the treatment of children of migrant parents.

— Lebanon should immediately reform its birth registration laws to ensure that the legal or marital status of parents bears no relation to their ability to register their children’s births. Removing all current birth registration requirements, except for the hospital-issued birth certificate, could achieve this.

— NGOs and other stakeholders need to raise awareness on this issue, especially among Lebanon’s younger generation, and should press the Lebanese government to stand by its obligations under the CRC.

— Stakeholders should press Lebanon to reform its birth registration policy and sponsorship system so that children of migrant workers are better able to obtain the nationalities of their fathers and mothers. These reforms would help to bring Lebanese law into compliance with the country’s international obligations regarding the right to a nationality.

— Governments of migrants’ countries of origin should be involved in the birth registration process, allowing the registration of migrant children at the respective embassies’ records, regardless of the legal status of the parents. The Caritas Lebanon Migrant Center could carry out related advocacy at national level; relevant Caritas member organisations could do the same in the countries of origin.

— Once Lebanon has amended its birth registration policy it should allow all migrant children to attend public schools at no cost, regardless of their legal status. Education is a human right on which so many other human rights rely.

For the complete report, go to: english.caritasmigrant.org.lb , or contact Najla Chahda, director of the Caritas Lebanon Migrant Center: nchahda@eclmc.org