Sister Anthonia Ezeibekwe is the manager of Holy Rosary Primary School and lectures at the Eastern Polytechnic University in Kenema, Sierra Leone, a whole city under quarantine due to Ebola.

People come to me and say “Sister, we have nothing to eat today.” If I have little money, I give it to them and they are very happy and appreciative. If I do not have money, I feel helpless and worried. These are simple, gentle people and Ebola has robbed them of their sense of dignity and source of livelihood.

Our whole city Kenema was worst hit at the outbreak of this dreadful Ebola virus. Many families have been wiped out and many children have been orphaned. There are also many widows and widowers who lost their partners to Ebola. People are traumatised and stigmatised. 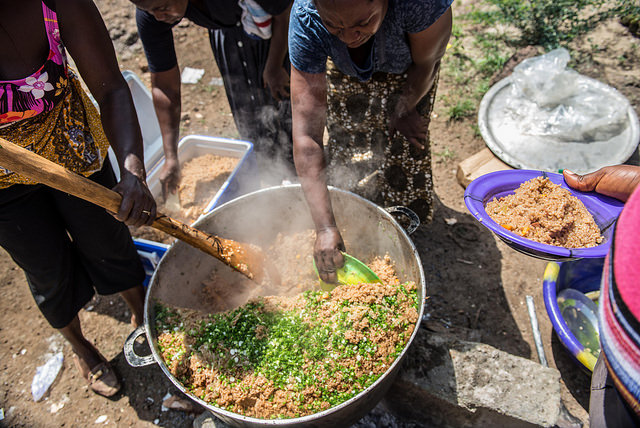 Women prepare a meal of rice and chicken for children in Allen Town. Sierra Leone. Photo by Tommy Trenchard for Caritas

Three pupils from my school—Holy Rosary Primary School in Kenema—lost parents: a mother and two fathers respectively. One of them had lost her mother earlier and so she is a real orphan now, with little or no help.

Kenema was declared an epicentre. It has been quarantined from the rest of the country for almost three months. Strict restrictions are put on movement. People are allowed to move about only within Kenema.

Only vehicles with food and medical supplies are allowed into Kenema, and there are strict checks at several places on the road. Those who managed to bring in food raise the prices and the poor are not able to afford it.

I go to the market and I see people buying very small quantities of essential food like rice, fish, oil and vegetables because prices are going up every day. So many are not able to afford three square meals. People look anaemic, malnourished. It is not just Ebola that kills. They don’t have the strength to resist or fight Ebola.

The Ebola crisis has paralysed other aspects of life here. Schools are not in session. The Ministry of Education is teaching some subjects on the radio. Students are encouraged to listen, text their questions or comments, and listen to the response. But how many students/pupils have radios and even phones to text to ask questions?

I see students in the open market and on the streets selling things to support their families or themselves. Others play football, while others watch videos from morning until night. Some girls may not go back to school because they have become pregnant. This is a worrisome situation. The effects of Ebola will linger on in our society for a long time after the crisis is over. God help us.

Even though the government, with help from the outside world, is trying to contain this very contagious virus, some people are still dying of Ebola and some houses are still quarantined.

Many people are still ignorant of preventive measures. The traditional practice of washing and touching dead bodies is difficult to let go and it is helping to spread Ebola. Some people insist they must do the last burial rites for their loved ones. Those who wash, dress, touch, and bury Ebola victims get infected with the virus. Some of them infect others.

I contacted Mr. Patrick Jamiru of Caritas Kenema. He has been organising awareness workshops. He gave information on Ebola to my teachers in Holy Rosary Primary School. 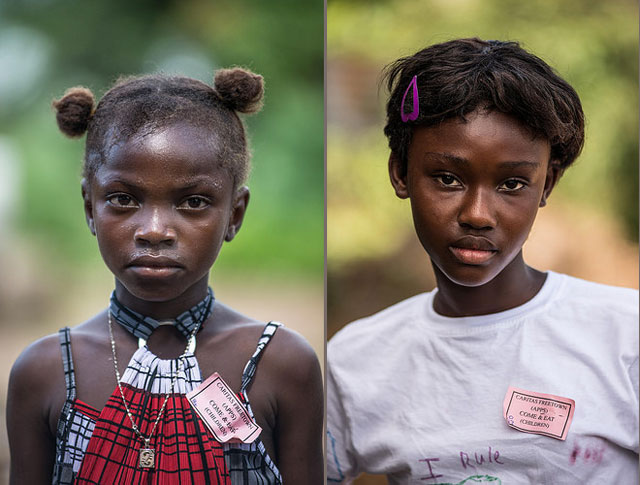 Juliana (L) and Katherine (R) both lost their parents to Ebola in Sierra Leone. Photos by Tommy Trenchard for Caritas

The teachers asked a lot of questions, such as: If they call the hotline for the ambulance, and no one comes, what do they do? Mr. Patrick Jamiru gave his number so he could facilitate the process and emphasised they should not touch any dead body.

They also wanted to know why are teams encouraging people to go to the treatment centre when there is no cure for Ebola? Mr. Jamiru answered that first so that the person does not infect other family members and also at the treatment centre, the doctors and nurses give medicine for all the symptoms of Ebola.

We continue to pray that one day, Ebola will leave us in peace!