“After the typhoon, there was no road here,” says Ronald Abao, with tears in his eyes. “There was just debris. Iron sheets, wood, material from people’s houses. And there were dead bodies here.”

We are driving through the town of Palo, which was directly in the path of Typhoon Haiyan as it crashed into the Philippines last November. Winds of up to 170 mph swept in from the sea, accompanied by a storm surge – a tsunami-like wall of water that flattened buildings, tore apart roads and drowned hundreds of people in the area.

Ronald was at Palo Provincial Hospital when the typhoon hit, looking after his wife Maria Gracia, who was sick.

“At 5:45 in the morning, some of the roof was blown off,” he remembers, “and the rain started falling inside the hospital. I told my wife – just hide under the bed. But the water kept rising, so I told her to come out again. By 6:00 the water was up to our knees. The wind became stronger and stronger and broken glass was flying around. People were panicking.

“All the patients were now standing up. People were shouting ‘God help us.’ That was when I told myself – I need to stay alive, for the sake of our children. No matter what happens, I need to be strong.”

At 6:30 the hospital was hit by the storm surge: fast-flowing water came crashing into the ward. Ronald picked up Maria Gracia and carried her on his back, struggling through the flood towards the main exit. Outside, it was almost impossible to see where he was going through the driving wind and rain.

At one point, Maria Gracia’s foot became caught in a mosquito net, and she fell down. Ronald had to dive underwater to pull her free. With the water still rising, he carried her to the next building, and then from room to room, hoping to find some way to climb up onto what was left of the hospital roof. Finally, in the last room he came to, he found a ladder.

“That ladder must have come from God’s hands,” he says. “We were so desperate already, but out of nowhere it appeared.

“My wife told me: ‘Leave me, because I can’t climb up! You have to stay alive!’ I told her – ‘You can do it! You have to do it!’ That was when I noticed her eye.” Saying that Maria Gracia’s eye was “not good” is an understatement. A piece of debris had struck her hard, and her eye was filling with blood. She couldn’t see through it, and she was rapidly losing consciousness.

Ronald helped her up the ladder, and then returned to help others climb up, including a woman who had just given birth. Within a few minutes, around 50 people were clinging to the roof, while the bodies of other patients, who hadn’t been able to escape, floated in the water beneath them. Ronald realised he was covered in other people’s blood.

Understandably, most of the hospital staff had fled the hospital before the typhoon, but one nurse had stayed behind, and she started caring for Maria Gracia, who was now unconscious.

“That generous nurse helped me,” says Ronald. “She said: ‘What happened to your wife?’ I said: ‘I don’t know.’ She wasn’t moving. I was crying, and I was also praying to the Lord, saying ‘Please give us another chance!’”

The nurse managed to insert an intravenous drip into Maria Gracia’s arm, and to wake her up, before moving on to assist other patients. Even when the water receded, she stayed at the hospital, treating seriously injured people who were carried there by friends and family.

Today, Ronald is returning to the hospital for the first time since the typhoon, determined to find the nurse. He wants to thank her for saving his wife’s life.

“I don’t want to see that hospital again,” he says, “but I want to find the nurse who helped us. I don’t know her name. She didn’t get tired, through the day and though the night. I remember asking her: ‘Ma’am, don’t you want to go home?’ And she said ‘No, because all these people need my help.’”

Ronald is visibly affected when we arrive at the hospital: his legs are shaking when he gets out of the car.

Inside, he walks down the main corridor, and arrives at the nurses’ station. Almost immediately, he spots the nurse, and greets her. She laughs with surprise when she sees him, and the two of them exchange memories of the most dramatic day of their lives.

After we leave, Ronald says that he’s delighted to have tracked her down. Her name, it turns out, is Hilda Ponferrada.

Ronald says that coming back to the hospital is an important milestone. “I am very happy,” he says. “I’m glad I’ve seen Hilda, and glad that she’s alive. I recall all of my memories from that day, but I’m not going to cry again. I said that if I came back, I would not cry anymore.” 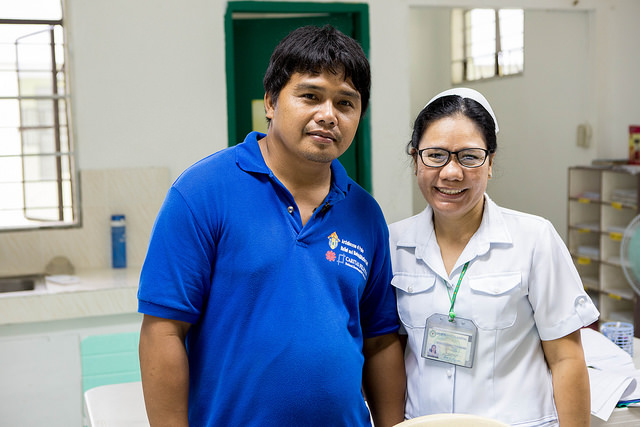 On 8 November last year, both Ronald and Hilda saved many people’s lives, pulling them out of the water, carrying them to safety, and treating life-threatening injuries. Neither of them sees themselves as a hero. Instead, Ronald, a lay preacher, says that he was simply trying to behave like a Christian.

Maria Gracia hasn’t fully recovered from the injuries she sustained during the typhoon, and today she is partially blind. However, the couple are due to have their third child within a matter of weeks. One year on from the typhoon, they feel that there is hope for the future.

“I am not a perfect person,” he says, “but I promised that if I survived the typhoon, I would support other people who are needy.”

The work he is doing is possible because of the incredible generosity of Catholics around the world, who donated more than EU135 million to Caritas Philippines Typhoon appeals last year.

“I am glad and happy that they help us,” says Ronald. “A million thanks, a threefold million thanks for what they’ve done. We are now building back. The healing of the wounds will take time, but we’re going in the right direction.” He smiles. “The healing process has started.”