Helping minors at risk in Morocco 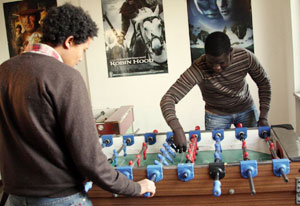 For these children, emigration offers an alternative to their way of life − an opportunity, a hope. But they are also putting their lives at great risk. Photo by Caritas Spain

Antonio Jimenez is an expert on child migration issues who lectures at the Universities of Huelva and Seville in Spain. Here he speaks about what can be done to minimise risks to child migrants in Morocco.

What are the biggest risks?

The most frequent risk factors are poverty, family situations, and the power of the media, while protection factors are education, culture, and the efficient action of social workers.

In countries like Morocco, high unemployment and low incomes are behind a large percentage of family breakdowns. Many children have to start working in the street when they are very young to help support their families. They often stop going to school. In cities like Tangier and Tétouan you see the risks boys and girls from families with meagre resources are exposed to on a daily basis. Some minors migrate to Europe alone. For these children, emigration offers an alternative to their way of life − an opportunity, a hope. But they are also putting their lives at great risk.

It is difficult in a country like Morocco, which allocates few financial resources to social initiatives for minors at risk. The country’s public education system does not guarantee access to vocational training, so many students leave school with few or no professional qualifications. Existing reception facilities for minors at risk are insufficient. Many lack basic financial resources. These centres often have no educators because the pay is so poor, so children fall under the care of older children.

However, organisations like the Association for the Protection of Children and Raising Family Awareness (APISF), based in Tétouan, work on behalf of disadvantaged children, welcoming those with family and social problems and helping them to consider alternatives to emigration.

What about social inclusion projects?

There’ve been six International Meetings with Minors in Situations of Risk in Tétouan since December 2012, aimed at proposing and designing social inclusion projects. Topics discussed have ranged from child protection systems in Morocco and Spain, to programmes for Moroccan street children, Romanian Gypsy minors and children on the Mexican-United States border, to the educational and cultural skills needed to deal with children in situations of risk.

These projects provide ground-breaking training experiences, bringing universities closer to social reality so that students studying for degrees in social education, for example, can get to know the context of origin of the migrant minors with whom they will later be involved in the host country. Students live alongside the children throughout the period, combining theory with practice. Moreover, 50 percent of the revenues from this initiative are used to partially fund social programmes with minors in Tétouan.

One thing that has come out of these meetings is the difference in behaviour between minors welcomed in Moroccan centres compared with those who have emigrated. In the host country they may have access to more social resources, but in their home country they still have the warmth of their people, their language, their religion, all of which help maintain a clear cultural identity.

Intercultural dialogue can break down all kinds of barriers, prejudices, and stereotypes. When social workers and education professionals are familiar in situ with the social reality of the children they work with on a daily basis, they feel greater empathy towards them. And nothing is more important for children living in an unfamiliar country than to feel that other people are interested in their culture.

What can be done to minimise risks facing migrant children?

Apart from social education initiatives, it’s important to reduce and mitigate the risks that excluded minors are exposed to in their country of origin, during the migratory journey, and in the host country.

Local authorities need to ensure there are centres where minors can go, on their own or with an adult, for food, hygiene and clothing. A degree of police surveillance should be facilitated in the outside areas where street children normally spend the night to protect them from aggression.

Government policies, in home and host countries, need to change substantially. Child protection needs to focus on the family, schools and reception facilities. Families should receive greater support from the state, especially in terms of financial resources.

European countries should enter into coherent collaboration agreements with Morocco, creating paths for occupational integration for young people, preferably in the home country but also in other countries. Thus, the financial resources European countries allocate to child protection would be placing greater emphasis on educational policies rather than on containment. There is no greater incentive to dissuade young people from emigrating than for them to know there are dignified employment prospects in their own country.