“My parents sent me here so I could go to school,” said Kay Doh*, a 13 year old boy who lives in a refugee camp on the Thai-Myanmar border. “There was no education in my village past Grade 4.”

Kay Doh comes from eastern Myanmar, home to the Karen people, the second largest ethnic group in the country. The Karen have been involved in a drawn out conflict against the Burman majority since 1948, just after Myanmar’s independence.

War and neglect have left Karen areas without schools, hospitals and the people in desperate poverty. The fighting, human rights abuses and poverty have driven tens of thousands from their homes. 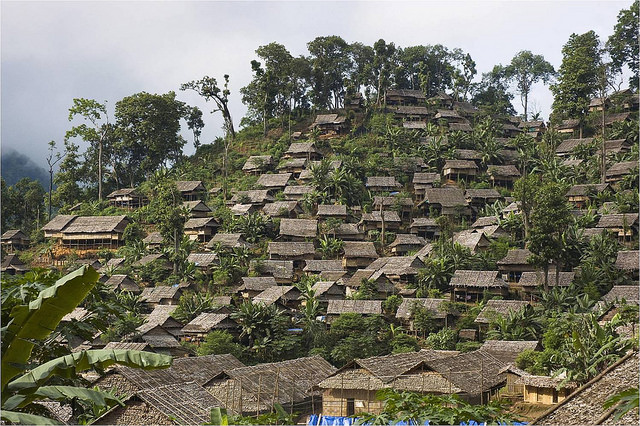 Around 120,000 Karen and other minority groups live in nine camps in Thailand, strung along the border. A ceasefire in Myanmar in 2012 has opened up the possibility of a return home, but it also means that aid to the camp residents has been reduced.

The camp where Kay Doh lives is called Mae Ra Ma Luang. It’s high up in remote, jungle-covered mountains. Small wooden huts line a steep ravine, with a river cutting the camp in half. You can get across by way of a few rope bridges.

“I left home four years ago with my brother,” said Kay Doh, whose parents stayed on their farm across the border. Many children are sent to the camps as they have much better education or medical resources than those at home.

He lives alone in a dilapidated hut. “My brother has now gone to live in a nearby farm to work,” he said. It used to be an uncle’s house, who now has resettled in North America. He has one saucepan, some cutlery, a couple of plates and that’s it.

“The hunger is the worst,” he said. The fall in financing means that food aid to camps has dropped by 20 percent. rice rations is 12 kg a month.

Then there is the loneliness. “My friends at school won’t visit me because I’m so poor. I can’t visit my parents because it’s too expensive,” he said.

Every couple of days he receives a visit from Mae*, a 60-something lady with a kind face and caring manner. She checks to see if he is ok or might need something. “He is a good boy and can cook and clean his clothes,” she said. “But at that age, he is not really able to look after himself.”

Mae is a refugee herself, a resident of the camp and one of the 360 plus community staff working for COERR, the Catholic Office for Emergency Relief & Refugees, part of Caritas Thailand. 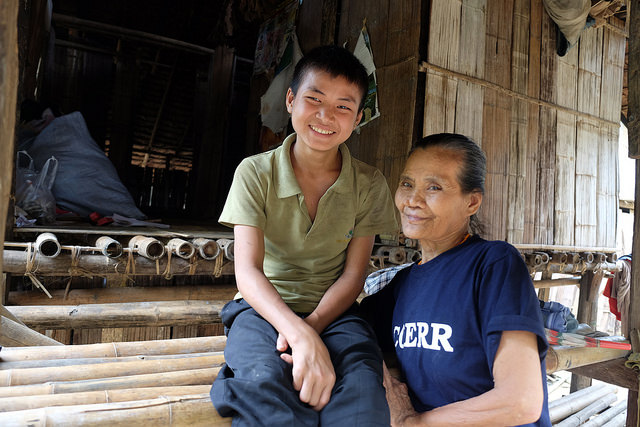 COERR helps about 10,000 of the refugees, working in all 9 camps, where it focuses on children who are living alone, are orphaned, living with relatives or otherwise in a vulnerable positions.

COERR camp staff carry out home visits to ensure the children go to school, that they’re healthy and to see if there are any serious problems affecting them, as well as providing some basic needs like school kits or candles.

Paw-Paw* is another child that Mae visits regularly. The 12 year old refugee has been in the camp for the last five years, living with an uncle, aunt and their five children since her parents both passed away from the same pulmonary sickness.

“My uncle would drink a lot,” she said. “Last April, he came back drunk and beat me with a stick. I didn’t run away because I thought that would make it worse. I was very scared.”

When her case worker Mae found out, she told the girl to visit friends when the uncle was drunk. Then she sat with both aunt and uncle to explain that his behaviour must stop, that it’s against camp rules and that if it continues she will have to go to the authorities.

“The children living in the camp without their parents have a higher chance of getting abused,” said COERR’s Nongnuch Boonhue*, who works on child protection programmes. “Through our home visit protection mechanism, we can reduce that.”

As well as the visits, COERR runs activities at their centre in the camp for the children.“We arrange games and encourage the children to talk about their past, present and their future hopes,” said Nongnuch Boonhue. 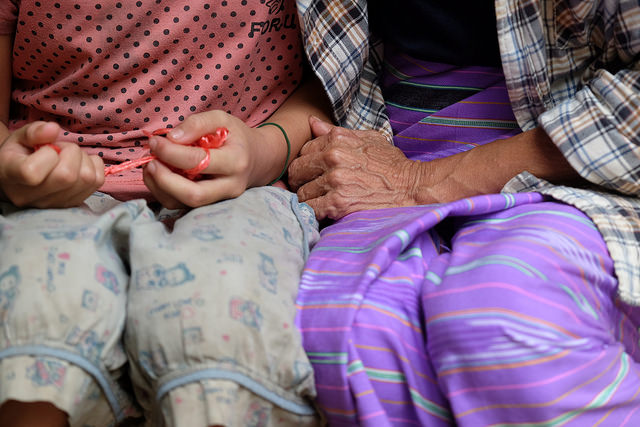 Key to the success of the programme is the trust between child and social worker. Photo by Nicholson/Caritas

“We talk about child rights through theatre and drawing,” she said. “They draw the human body and mark areas where other people shouldn’t touch. We teach them that before they make a decision they must collect information so they can make the best choice.”

Key to the success of the programme is the trust between child and social worker. Aung, 28 years old, is another camp resident who works for COERR.

“I was an unaccompanied minor myself. I came to get an education and because I didn’t want to be recruited as a soldier,” he said. “When you have war, you have poverty. War is the source of poverty.”

Now he looks after about 40 children, carrying out home visits, making sure they’re doing well and encouraging them at school.“It’s great to be able to care for children in the same position as I was. I feel like a second parent,” he said.

Aung is worried about having to return to Myanmar, which should happen in the next 3 years. COERR is providing livelihoods training so that when the refugees do go back they will have the skills to survive.

“The camp is safe. If they live in Myanmar, they fear there might be more fighting,” said Nongnuch Boonhue. “But they also lack freedom in the camps. They cannot leave to find work outside. They feel like a bird trapped in a cage. There is no real future in the camps.”