Beyond the tsunami waves

Fishermen returned to their villages on the morning of the 26 December 2004 to discover their homes washed away and their loved ones lost. An apocalyptic tsunami had devastated coastal communities across Indonesia, Thailand, the Maldives, India and Sri Lanka.

Some 300,000 people were killed in a matter of hours. Their deaths seemed random. A family that ran left instead of right were spared. One village was completely destroyed, while up the coast another was untouched.

It was the day after Christmas, the day we Christians celebrate God giving to us his most precious gift, his Son. Many asked where was the face of God in such a cataclysmic disaster?

We found the answer in the Gospel message of hope, rebirth and resurrection. We saw God’s love for all humanity in the human response to the Asian tsunami. 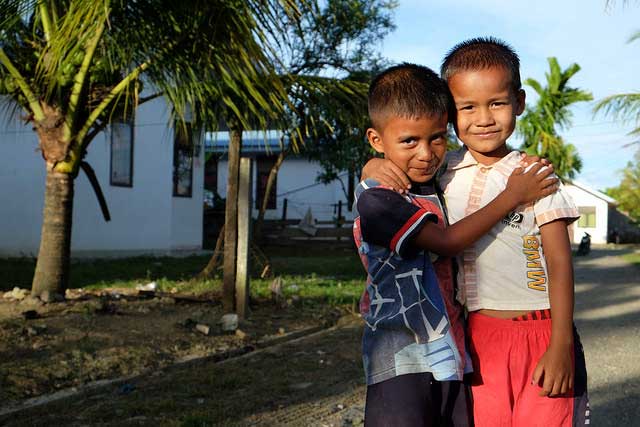 On 26 December 2004, Aceh, Indonesia was devastated by a tsunami. Families were moved to an area called Leuhan on the outskirts of Meulaboh. There they received houses, with water and sanitation, electricity and roads from Catholic Relief Services and Caritas Switzerland. Photo by Patrick Nicholson/Caritas

We found courage in the actions of the survivors themselves. It was their efforts in the first hours and days that saved lives, that brought communities together, that offered comfort to those around them.

We found solidarity from the people who supported Caritas members in rich and poor countries to provide support for the people who now needed to rebuild their lives. Caritas responded to the tsunami with a US$485,000,000 programme. That money was used to provide immediate relief, then on building homes, restoring livelihoods and rebuilding lives in a sustainable way.

We found love in the staff who worked tirelessly to get aid through. We owe a great debt to the dynamism of national and international staff. It was a real challenge to deliver on our promises of rebuilding after the tsunami. But it has been made possible because of the compassion of our Caritas colleagues.

We found strength in the parish priests, catechists and church volunteers who mobilised the communities, gave out the aid, cooked the meals, built the shelters, ran the community centres and provided the counselling. Caritas is part of the communities we serve. Volunteerism is at the heart of Caritas.

We found hope with the knowledge that we can prepare better for disasters in the future. New houses and infrastructures built after the tsunami and community training will reduce loss of life if such a disaster happens again.

Out of the ruins, we believe the communities can build better futures for themselves. Extreme weather linked to climate change is increasing and will likely cause more emergencies. We know that disaster preparedness will save thousands of lives in the future.

Creating such readiness is a great challenge for Caritas. It will mean channelling more financial and human resources into emergency preparedness. We cannot do it on our own but only through working with other aid networks, faith groups and governments.

A cyclone, an earthquake, or an erupting volcano are hazards, but they only become deadly disasters when they happen in vulnerable areas where people have little defences. Only one in ten of the people exposed to natural hazards live in poor countries, but they account for more than half of total deaths. Poverty equals vulnerability.

We must challenge the ‘globalisation of indifference’ which is pushing poor people into more and more vulnerable positions. Social justice is the best disaster preparedness programme we have.

We must challenge the neglectful approach to Creation. As Pope Francis said, “Let us be “protectors” of creation, protectors of God’s plan inscribed in nature, protectors of one another and of the environment.”

One positive result of the tsunami is that our Caritas national organisations and their ties with communities are strengthened. They’ve been able to use that strength as a gateway for other integral human development efforts.

Muslim, Hindu, Buddhist and Christian: all faith-based groups showed that we have a key role to play in preparing for and reacting to emergencies. We’d always known that of course, but it was news to some. As people of faiths we must now work together in taking forward a rights based approach to the ongoing disaster preparedness debates around the post-2015 agenda.

Pope Francis says, “Caritas is the caress of the Church to its people, the caress of the Mother Church to her children, her tenderness and closeness.” Through Caritas, we were given the opportunity to walk side by side with those suffering after the tsunami and in them we could see the face of the risen Christ.