When the worst outbreak of Ebola in history struck West Africa, Caritas swung into action. Starting in spring 2014, Caritas teams fanned out over Guinea, taking motorcycles up rough roads to villages and telling people in rural areas how to prevent the spread of the disease.

Caritas Guinea distributed soap, bleach, buckets and other hygiene items to more than 100,000 people and worked with a telecoms company to send SMS messages about Ebola to more than a million people. 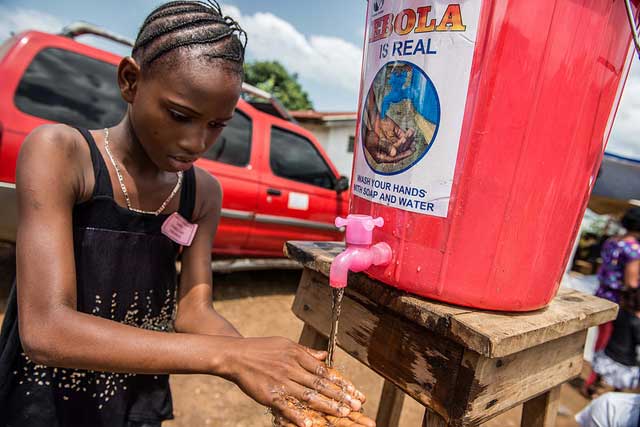 Handwashing is key to protecting people from Ebola. Photo by Tommy Trenchard for Caritas

Towards the end of 2014, new infections of Ebola are decreasing in some parts of Guinea, though the virus still remains a threat in other areas and has claimed many lives.

Sadly, the virus spread to neighbouring Liberia and Sierra Leone, wreaking havoc in both villages and cities. By summer 2014, Caritas was doing similar prevention work in those countries, training religious leaders, parish communities, and health care workers in Catholic clinics. Because handwashing is a first line of defence, Caritas teams trained hundreds of people in proper handwashing methods (including use of a bleach solution) that they could pass on to their communities.

As the crisis worsened and more families were isolated in their homes, Caritas began working with the World Food Programme to give food to quarantined families. When Sierra Leone’s government was overwhelmed with hotline calls, and could not bury the dead quickly enough, Caritas members and religious orders supported burial teams. In Liberia, Catholic Relief Services helped reopen the country’s only Catholic hospital that was closed after many of its staff died of Ebola and gave a year-supply of medicines to the sixteen Catholic clinics there.

Schools in Liberia and Sierra Leone have been shut down for months. Concerned about children sitting home and missing out on education, Caritas distributed radios to students so they could listen to lessons on the airwaves. In Sierra Leone, Caritas also found temporary placements for Ebola orphans whose relatives were, at first, reluctant to take them in. 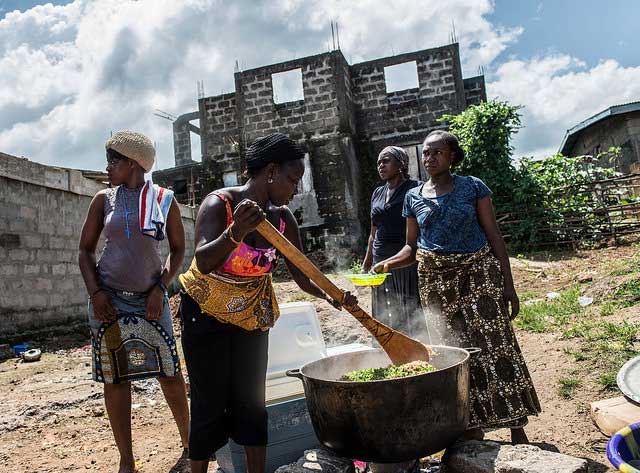 Women prepare a meal of rice and chicken for children in Allen Town. Sierra Leone. Photo by Tommy Trenchard for Caritas

With training and support from Caritas, priests and other religious are providing pastoral care to grieving families whose loved ones may have been buried unceremoniously. By offering respect and care, Caritas teams hope to minimise risky behavior related to funerals. Corpses of Ebola victims are extremely contagious and traditional rites can spread the virus rapidly. Nevertheless, some people bribe Ebola teams to change test results for a deceased family member, so as to avoid the shame of burying loved ones “the Ebola way”.

Other challenges remain. Despite blanket awareness raising by Caritas, governments, Catholic dioceses and parishes, religious orders, and other groups, some people retain beliefs that the virus is transmitted via mosquitoes or witchcraft, or that traditional healers can treat Ebola, or that bathing with salt and hot water can prevent the disease. People in quarantined homes knowingly escape and mingle with the general public. People hide corpses, refusing to allow burial teams to take them. In countries where prolonged wars made people suspicious of the government, conspiracy theories about Ebola continue to be a problem.

Although recovered people cannot pass on the disease through casual contact, stigma is another huge issue. A Caritas member survey found that 76 percent of respondents would not welcome a recovered neighbour who returned to their community. Thirty-two believe that a fully recovered student will put classmates at risk of Ebola. In Sierra Leone and elsewhere, Caritas is working to fight stigma and help survivors return to normal life.

Children enjoy a meal of rice and chicken at a Caritas event in Allen Town Sierra Leone. Photo by Tommy Trenchard for Caritas

As 2015 begins, Caritas will continue its prevention and training work, but will also respond to longer-term needs. In Sierra Leone, Caritas will provide food to households of Ebola survivors or quarantined families. With a special focus on widows, orphans, and the elderly, Caritas will also offer psychosocial and trauma counselling services for more than 24,000 people who have either survived Ebola or lost a loved one.

Ebola has taken a severe toll on local economies, preventing farmers from harvesting, affecting small businesses, and keeping vendors from selling their wares. In the coming year, Caritas will provide livelihoods support to vulnerable families so they can earn their own living. And Caritas diocesan teams will reunite orphans and separated children with their extended families.

2014 was a brutal year for these three most affected countries in West Africa. Thousands are dead, thousands of children orphaned, thousands of lives changed forever. Ebola is still raging in some communities, and those that have made it through the crisis are more impoverished than ever. Caritas programmes will continue until the Ebola epidemic is wiped out—and beyond.

At the end of 2014, Caritas launched an emergency appeal for Ebola programmes which will prioritise the needs of women, girls and orphans in 2015.