“There’s a little girl here about 9 or 10 years old. She asked for the phone. She said, ‘My dad and mom are in bed in hospital. I want to talk to them and see how they are doing.’” Father Peter Konteh, a Caritas priest in Ebola-stricken Sierra Leone, is speaking about one of the children in an orphanage he runs. “We tried to explain the concept of death to her using stories and drama, but she could not perceive it.”

Children whose parents have died; children who have recovered from the virus themselves; children whose families and sense of security have been shattered by the emotional and economic toll of the disease—huge numbers of children in West Africa have been affected by Ebola over the past terrifying months. Caritas is working to help the youngest victims of the crisis. 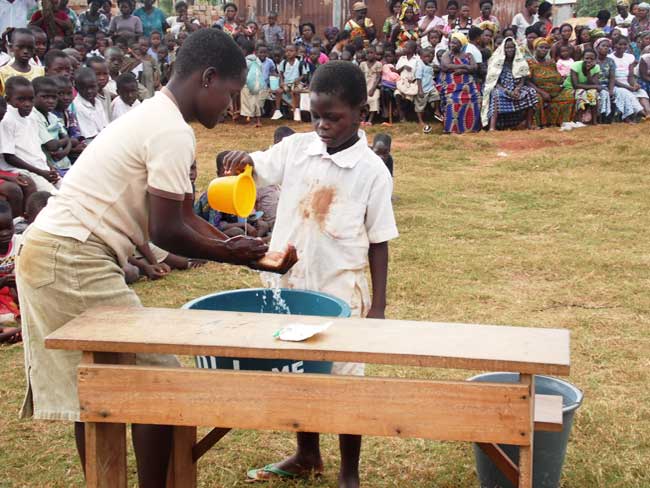 “An ounce of prevention is worth a pound of cure” in Togo, where Caritas is focused on teaching children how Ebola spreads so that the deadly disease does not come to the country. Photo by Caritas Africa

“The worst question to hear from children is ‘Am I going to die? The villagers are all dead.’ It’s difficult to answer,” says Dr. David Bob Kinsiger, who is volunteering with Caritas Freetown and who earlier treated adults and children with Ebola. “You say ‘No, you will get well’.”

Thankfully, many children do recover, or don’t become ill in the first place. “It was surprising that there were fewer children than expected in the treatment units,” says Dr. Tim Flanigan, an infectious disease specialist who volunteered to train Catholic clinic staff in Liberia. He says it is uncertain if the rate of infection or the severity of the illness might be less in children.

But one thing is clear: many parents are dead. “There are thousands of orphans now,” says Father Peter. His orphanage, St. Mary’s, opened originally for children who lost their parents to Sierra Leone’s war. Now, he says, “St. Mary’s is taking in a lot of orphan survivors”—children who had Ebola themselves and lived.

The orphans sometimes stay at St. Mary’s for 10 to 15 days while Father Peter and other staff try to find them permanent homes. Some children come holding the medical certificate that shows they are free of Ebola and not infectious. “There are a few children that the communities have refused and will not accept,” he says, but often he can track down relatives who will take the children in after a time.

Sometimes relatives of the children are afraid of catching Ebola. In a few cases, “The relatives say, ‘Oh, don’t bring them here, they have Ebola.’ But an underlying issue is that they want to inherit the property the parents left,” says Father Peter. “We have volunteer lawyers who are looking into the issue.”

Children at St. Mary’s have horror stories of what they lived through. “One boy, about 12 or 14, was picked up with his family by an ambulance from their village near Port Loko,” says Father Peter. The ambulance driver sprayed the family so often with chlorine that “he was choking. He says he survived because there was a window and he stuck his head out.” Of the family, only he and his younger sister survived. 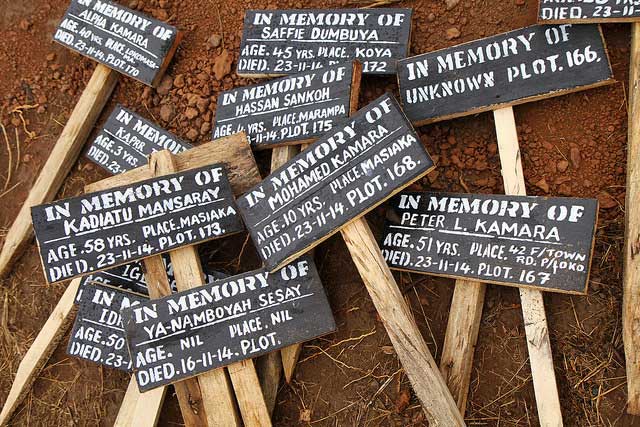 CRS, Caritas member in the USA, is supporting the District Medical Office with the safe and dignified burials of Ebola victims in 3 districts in Sierra Leone. Photo by CRS

Even children not directly affected by Ebola are suffering from the epidemic’s economic and social impact. In Guinea, Liberia, and Sierra Leone, Caritas groups are working to bring rations to quarantined families and others who cannot earn a living because of Ebola-prevention restrictions.

Another huge problem is what happens when children aren’t in class. “Schools are still closed and so the children do not do anything during the day,” says Alexandre Kolié of Caritas Guinea. “It’s been a problem for parents.”

“The education situation is appalling,” says Father Peter. “There are schools that have been made into Ebola response centers. You’re saying ‘no’ to school for a long time.”

“So many children have joined bad gangs because of idleness, and others play football all day,” says Sister Anthonia Ezeibekwe, a teacher in Kenema, Sierra Leone. “Some children whose parents have died of Ebola, and who have been adopted by their relatives, have been sent to beg or sell small items in the street.”

“When they are not in school, they are overworked by their guardians,” agrees Augustine Tamba Fallah of Caritas Freetown.  “They give them oranges or bananas to sell.”

“Some of the older girls have become pregnant.” 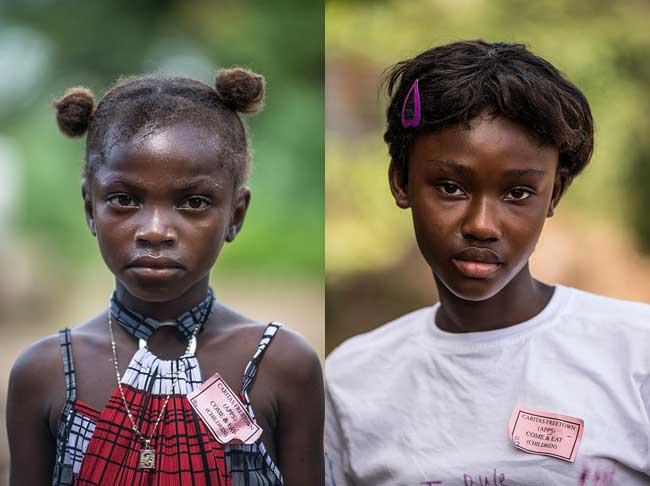 Juliana (L) and Katherine (R) lost both of thier parents to Ebola in Sierra Leone. Photo by Tommy Trenchard for Caritas

Sierra Leone’s government is offering lessons on the radio, but for many children such a luxury is out of reach. So Caritas distributed hundreds of radio sets and batteries. “When it’s time for the education radio show, they listen,” says Father Peter. “We plan to prepare some mock exams or tests to see if they are really learning.”

Caritas is also working with experts to address the PTSD that children are suffering. “Children who are being taken care of by relatives are always crying, saying ‘I am thinking of my mom or dad,'” says Fallah. Even when people survive, “there is the psychological trauma of parents being ill, of terrible fear in the family, of people coming in suits looking like they are spacemen,” says Dr. Flanigan.

“Some people shout at the children not to touch each other, don’t do this, don’t do that, without any explanation,” says Sister Anthonia. “The sound of the siren from ambulances conveying dead bodies and Ebola patients is very traumatic for the children.”

Caritas continues to care for the most vulnerable as the crisis expands. “We need to think what future we can give to these children–food, health care, school,” says Moira Monacelli, West Africa Regional Coordinator for Caritas Italiana. “Now for short term, but also for the long term.”