Christmas message of hope for Syria 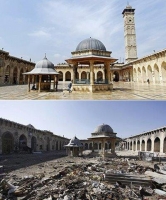 The Umayyad Mosque has been virtually destroyed.

I will do my best to spread hope in Aleppo this Christmas, but it is hard to celebrate when your city is in ruins.

Four years ago, Aleppo was a thriving, cosmopolitan place, but everybody has suffered in this terrible war. The rich have left, the middle-classes have become poor, and the poor have become miserable. 80 per cent of people in Aleppo don’t have a job. When I walk the streets, I feel attacked by the poverty – by the sight of sick, tired, desperate people with no hope for the future.

At the moment, the city of Aleppo is split in two. In a few areas, you can sometimes convince yourself that life goes on as normal – people go to churches and mosques, children attend school, students go to university – but you never know where the next rocket will fall.

Other areas – like the old City and the souks – have been devastated by the fighting. The beautiful Umayyad Mosque has been destroyed by shelling. A city that used to be happy and prosperous is now divided against itself.

Everywhere you look, life is hard. There used to be more than enough food in Aleppo. Now when I see an apple or a banana, I don’t want to eat it. I think to myself: millions of people in Syria will not be able to eat an apple today.

It is desperately cold this winter, with no heating or electricity across the city. Every evening it gets dark early. Here in my bishopric, we light a stove, using chairs for firewood, chopping up and burning one per night. When I go to bed, it is often so cold that I struggle to sleep.

But even as I lie shivering under my blankets, I remember how lucky I am compared to my brothers and sisters who have nowhere safe to rest. 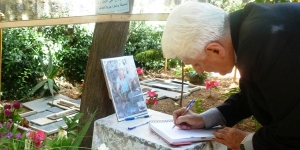 As President of Caritas Syria, I organise emergency aid for tens of thousands of people of all faiths, delivering food, healthcare and shelter. We have centres across the country where people come to receive supplies, and our volunteers also do outreach visits to families who are at risk.

But I am always shocked by the levels of need. Even doctors and engineers queue up for food baskets at our centres: the economy has collapsed, and they cannot support themselves or their families.

Understandably, many of those who can afford to leave have already departed. About half of the Christians who used to live here in Aleppo have already fled the city, mostly to neighbouring countries or to Europe or America. We have 45 churches, but many now stand empty.

In neighbouring Iraq, there are no Christians left in Mosul – a city where a Christian culture has thrived for 2,000 years. How much longer will our faith survive in Syria? A Muslim cleric recently told me that he couldn’t imagine the country without Christians. He said that Christians are the glue that holds Syria together: we take no side in this war; we just want it to end. It would be a tragedy if a religion that has flourished here for millennia was persecuted to oblivion.

On Christmas Eve, we will not celebrate Mass at midnight as we used to: it is too dangerous for people to be out on the streets at night. Instead we will gather at 5 in the evening, early enough for the congregation to go home in safety.

On Christmas Day we always used to have a big dinner at the cathedral and dancing in the evening. We can’t do that now. People can’t afford food, and we find it hard to express joy when there is so much suffering.

But in churches across Aleppo we are still working hard to prepare for Christmas. We have organised choirs, nativity scenes and Christmas trees. Despite the fear and the violence, we believe that peace is possible, and we are praying and waiting. Everybody is tired, but everybody is doing what they can to live, looking for the light coming from heaven not from earth.

What gives me hope this Christmas? The compassion of people who take care of each other. The small signs of humanity as people share what little they have. The solidarity of my brothers and sisters around the world. Most of all, what gives me hope is my faith. I say prayers in the morning, and read the Word of God, and it gives me the conviction that we can carry on.

We have to continue to support each other. We have to respect each other, to treat each other with dignity and to understand each other’s suffering. We have to start seeing ourselves not as Orthodox or Catholic, Sunni, Shiite or Alawite, but as Syrians who can live together in peace.

My message is that Syria is a beautiful country. Please help spread a message of peace. It is hard to find hope in Aleppo this Christmas, but there is still some joy in my heart.